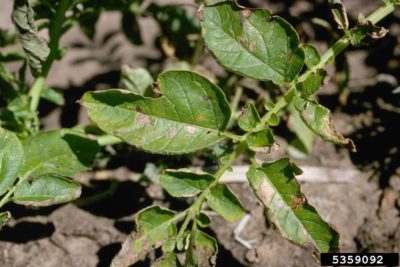 What is Potato Early Blight?

Early blight of potato is a common disease found in most potato growing regions. The disease is caused by the fungus Alternaria solani, which can also afflict tomatoes and other members of the potato family.

Potatoes become infected with early blight when foliage has become excessively wet due to rain, fog, dew, or irrigation. Although not a terminal disease, severe infections can be fairly detrimental. In contrast to its name, early blight rarely develops early; it actually usually affects mature foliage rather than young, tender leaves.

Symptoms of Potatoes with Early Blight

Early blight rarely affects young plants. Symptoms first occur on the lower or oldest leaves of the plant. Dark, brown spots appear on this older foliage and, as the disease progresses, enlarge, taking on an angular shape. These lesions often look like a target, and, in fact, the disease is sometimes referred to as target spot.

As the spots enlarge, they may cause the entire leaf to yellow and die but remain on the plant. Dark brown to black spots may also occur on the stems of the plant.

Tubers are affected as well. The tubers will have dark gray to purple, circular to irregular lesions with raised edges. If sliced open, the potato flesh will be brown, dry, and corky or leathery. If the disease is in its advanced stages, the tuber flesh looks water soaked and yellow to greenish yellow in color.

The spores and mycelia of the pathogen survive in infested plant debris and soil, in infected tubers and in overwintering host crops and weeds. Spores are produced when temperatures are between 41 and 86 degrees F. (5-30 C.) with alternating periods of wetness and dryness. These spores are then spread through wind, splashing rain, and irrigation water. They gain entry via wounds caused by mechanical injury or insect feeding. Lesions begin to appear two or three days after the initial infection.

Treatment of early blight includes prevention by planting potato varieties that are resistant to the disease; late maturing ones are more resistant than early maturing varieties.

Avoid overhead irrigation and allow for sufficient aeration between plants to allow the foliage to dry as quickly as possible. Practice a two year crop rotation. That is, do not replant potatoes or other crops in this family for two years after a potato crop has been harvested.

Keep the potato plants healthy and stress free by providing adequate nutrition and sufficient irrigation, especially later in the growing season after flowering when plants are most susceptible to the disease.

Only dig the tubers up when they are completely mature to prevent damaging them. Any damage done at harvest can additionally facilitate the disease.

Remove plant debris and weed hosts at the end of the season to mitigate areas where the disease may overwinter.