Potato Plant Diseases – Is There A Treatment For Potato Leafroll Virus 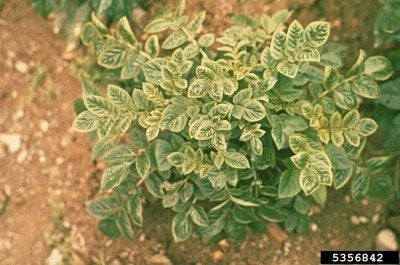 What is Potato Leafroll?

The pesky aphids strike again. Yep, aphids are responsible for plants with potato leafroll virus. The aphids transmit a Luteovirus into the vascular tissue of the potato plants. The worst culprit is the green peach aphid. The virus is introduced either by the aphids or previously infected seed tubers.

The virus, unlike some other potato plant diseases, takes some time for the aphids to acquire (several minutes to hours) and process through its body before it is a vector of the disease. Time is relevant, I know, but in this case, since the disease takes longer to spread, insecticides can be beneficial.

Once an aphid has the disease, it has it for its entire lifetime. Both winged and non-winged aphids are responsible for spreading the disease. As the aphids feed on the plant, the virus is introduced into the phloem tissue (vascular) and multiplies and spreads.

Plants with potato leafroll virus will, as the name indicates, have leaves that roll, showing chlorosis or reddening, a leather-like feel, and dead spots along the leaf veins. The plant will become overall stunted in height and the tubers will also show necrosis. Some types of potato are more susceptible than others, including Russet Burbank, the most commonly cultivated variety in the western United States.

The amount of tuber necrosis and severity will depend upon when plants with leafroll virus were infected. The necrosis may also increase during the storage of the tubers.

Is There a Treatment for Potato Leafroll Virus?

To thwart potato leafroll virus, use only certified, disease-free, seed tubers. Control volunteer potatoes and pluck out any plants that appear to be infected. The most popular potato varieties do not have any resistance to potato leafroll virus, but there are other cultivars that do not develop the necrosis on the actual tubers.

Treatment for potato leafroll virus involves using chemical controls to eradicate aphids and reduce the spread of the disease. Apply insecticide from early to midseason.