Varieties Of White Potato – Growing Potatoes That Are White 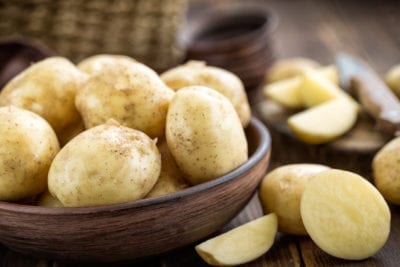 In the United States, more than 200 varieties of potatoes are sold comprised of seven types of potato: russet, red, white, yellow, blue/purple, fingerling, and petite. Each has its own unique characteristics. Some potatoes are better for certain recipes than others, but if you are looking for an all-purpose potato, try growing some of the white potato varieties. The following article contains information on the numerous types of potatoes that are white.

There are really only two types of potatoes that are white: round white and long white.

Round white are probably the most common varieties of white potato in use. They are easily identified by their smooth, thin, light tan skin, white flesh, and round shape. They are extremely versatile and can be used for baking, boiling, frying, mashing, roasting, or steaming.

Long white potatoes are really more of an oval shape, again with thin, light tan skin. They have a medium level of starch and are used for boiling, frying, and microwaving.

Compared to Russets, white potatoes have a smoother, thinner, lighter-colored skin. The skins are so thin that they add a slightly pleasant texture to creamy mashed potatoes and yet hold their shape when boiled.

Some of the dozens of varieties of white potato cultivars include:

Other options include the following:

White potatoes can be grown in many locations but are a particular favorite in the warmer climates of the southern United States where the thick-skinned varieties do not grow well.

Purchase certified tubers and cut them so the least amount of cut surface is exposed but that each piece has two eyes. Allow the cut pieces to dry for a day prior to planting.

Potatoes thrive in sandy loam with a pH of between 4.8 and 5.4 amended with plenty of organic matter that is loose and well-draining. Many people plant them in raised beds, which is ideal as it improves drainage. Amend the soil with manure or compost in the early spring and till or spade it in well.

Fertilize with a complete 10-10-10 food. When the sprouts have pushed out from the soil, begin hilling soil around them. Fluff up straw or other mulch over the potatoes to protect them from the sun.

Keep the crop regularly irrigated and weed-free. When the plants begin to yellow and the lower leaves die off, reduce the irrigation. This is an indication that the plants will soon be ready to harvest and you don’t want the tuber to rot from too much water late in the season.

When the plants turn yellow, carefully dig up the potatoes. Spread them out to dry off but don’t wash them until just prior to use. Store them in a cool, dark area out of direct sunlight which will cause them to turn green and become inedible.