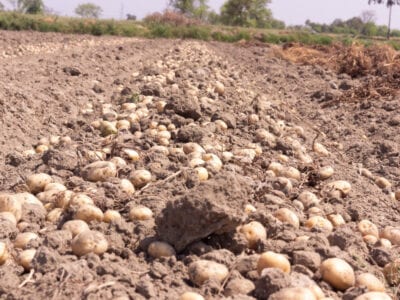 A member of the nightshade family, which includes other New World crops such as tomatoes, peppers, and tobacco, the potato was first brought from the Americas to Europe in 1573. A staple of the Irish peasant diet, the potato was introduced there in 1590 and was an important nutrition source providing calories (starch/sugar), a small amount of protein, vitamin C, B1, and riboflavin along with other daily nutrients. Common at that time, storing potatoes in ground pits was one way to ensure plenty of food throughout the winter season.

Generally speaking, storing potatoes in the ground is not the most recommended method, especially for any long term storage. Leaving the tubers in the ground under a heavy layer of dirt that may eventually become wet will most certainly create conditions that will either rot the potato or encourage sprouting. Cool humid conditions of 38 to 45 degrees F. (3-7 C.) found in cellars or basements are ideal for most potato storage.

Once the potatoes have been harvested, they can be stored for extended periods of time as long as they are kept dry and out of the sun. The leaves and flowers of potatoes are toxic and the tuber itself may become green and poisonous if in the sun, so the lack of light is an important aspect when storing potatoes in the ground.

While most people store potatoes indoors in a cellar or the like, storing potatoes in the ground has long been a traditional storage method, using potato pits for winter storage. When creating a potato pit, proper construction is the key to preventing rot in the spuds and allowing you to dig out only the few you need at any one time.

How to Store Potatoes in a Pit

Creating a potato pit is a simple matter. First, locate an area outdoors that remains fairly dry, such as a slope or hill. Don’t choose a spot where rainwater tends to pool, as the stored spuds will rot.

When creating a potato pit, dig a 1 to 2 foot (31-61 cm.) deep pit at a width dependent upon the number of potatoes you wish to store. Then fill the bottom of the pit with 3 inches (8 cm.) of clean, dry straw and place the potatoes atop in a single layer. You may store up to two bushels of potatoes in a single pit or 16 dry gallons (60 L.) if you can’t wrap your brain around a peck or a bushel.

Add another deep layer of straw on top of the potatoes, between 1 and 3 feet (31-91 cm.) deep, depending upon the severity of the weather in your region.

Finally, put the previously excavated soil from the pit back on top, covering the newly laid straw until it is at least 3 inches (8 cm.) thick and no straw is exposed.

In extreme climates or just for additional protection, you can dig the pit deeper than recommended above and put a clean plastic barrel at a 45-degree angle into the pit. Fill the barrel with the tubers and place a lid on it, loosely closed. Then follow instructions above beginning with covering the barrel with 1 to 3 feet (31-91 cm.) of straw.

Using potato pits for winter storage should protect the spuds for 120 days or at least through the winter months.