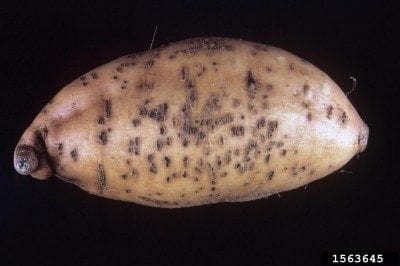 I say potato, but you may scream, “What are these giant white bumps on my potatoes!?!”, when you unearth your crop this season. Swollen potato lenticels give a potato an overall uniformly bumpy appearance when they make their debut. Scary though they seem, they’re not a cause for serious concern. You should take note when you find them, though, because swollen lenticels on potatoes tell you a lot about your garden’s suitability for growing this root vegetable.

Lenticels are special pores in plant tissues that allow oxygen exchange with the outside world. Similar to stomas, lenticels appear on woody tissues like stems and roots instead of along more tender leaf tissues. So, you may ask yourself, “What causes potato lenticels to swell?”. The answer is moisture and lots of it.

Enlarged lenticels in potatoes can appear while the potatoes are still growing, or they can pop up when potatoes are in storage, giving a gardener a sudden surprise. As long as there aren’t signs of other problems, like fungal or bacterial disease, potatoes with swollen lenticels are perfectly safe to eat. They tend to go bad faster, though, so keep that in mind when sorting your harvest.

Swollen lenticels on potatoes appear in overly wet soils or humid storage environments, especially if oxygen availability is low. Choosing a well-draining site for your potatoes is the only effective way to prevent them.

When you’re prepping your bed next season, check the drainage carefully by digging a hole that’s 12 inches (30.5 cm.) deep and 12 inches (30.5 cm.) square. Fill it up with water and allow it to drain before filling it again. Allow your hole to drain for exactly an hour and check the water level. If your soil drained less than two inches (5 cm.) during that time, you have very poorly draining soil. You can choose another site and try again, or attempt to fix the one you have.

Increasing soil drainage is a lot easier than it would appear, especially if you usually mix your soil well before planting time anyway. Start by adding a layer of compost to your bed that’s equal to 25 percent of its depth, for example, if your bed is 24 inches (61 cm.) deep, you would mix in about six inches (15 cm.) of well-rotted compost.

Recheck the drainage after you mix your layer of compost into the soil. If the drainage is still very slow, it may be better to construct an above-ground bed, potato hills, or simply plant your potatoes in large containers.