Bumpy Pumpkin Fruit: Find Out What Causes Warts On Pumpkins 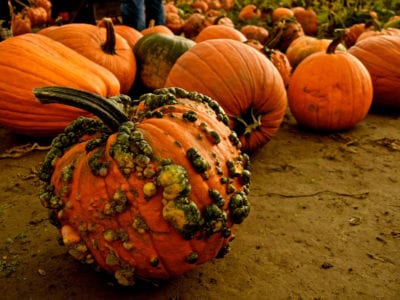 Warty pumpkins are a hot trend, and this year’s most prized jack o’ lanterns may very well be made from warty pumpkins. What causes warts on pumpkins and are bumpy pumpkins edible? Let’s learn more.

What Causes Warts on Pumpkins?

While many people desire a smooth, unblemished pumpkin to carve for Halloween, others love the look of the recently introduced warty pumpkin varieties. No, these aren’t afflicted with some heinous disease; they are actually genetically engineered to create bumpy pumpkin fruit. It is actually natural and not unusual for pumpkins to have bumps, but years of selective breeding have weeded out this natural tendency until what we view as the norm are unblemished pumpkins.

Over the course of ten years of selective breeding, the brand Super Freak has released their most wart-riddled pumpkins to date, Knuckle Head pumpkins. These are genetically designed to be 12-16 pounds (5.5 to 7.5 kg.) of lumpy, bumpy, perfectly sized for carving especially, and deliciously creepy. Gargoyle and Goosebumps are other varieties of warty pumpkin.

Other Reasons for Bumpy Pumpkin Fruit

If you’re certain that you aren’t growing a variety of bumpy pumpkin fruit, then the issue may be viral. Mosaic virus can turn a smooth pumpkin into a lumpy one. The lumps in this case look like they arise from under the skin of the pumpkin while genetically engineered warty pumpkins look like each protuberance sits atop the skin. Mosaic infection is spread by aphids, which results in smaller leaves and vines as well as leaves with dark and light blotching.

Are the bumpy pumpkins edible? While unsightly, mosaic afflicted pumpkins can still be eaten, although they may be of lesser quality than unaffected fruit.

Insects munching on tender young pumpkin shells can also scar the surface resulting in bumps. Cucumber beetles are usually the culprits here and can afflict all the cucurbits in your garden. They are also vectors for Mosaic virus.

To combat both the virus and the beetles, apply pyrethrin spray to the plant. First, dilute the pyrethrin to 3-5 tablespoons per gallon of water (44.5-74 mL. per 4 L.). Be sure to cover all of the foliage. That should take care of the beetles and by virtue of that, Mosaic virus. You can also mulch with aluminum foil to prevent Mosaic virus infection, and discard any pumpkin plants that show signs of infection. Control weeds and aphids via insecticidal soap as well. Repeat applications each week until there are no signs of aphid infestation.

Lastly, bumpy pumpkin fruit may be caused by edema. Edema is most often seen in cool, wet growing years. Unlike Mosaic virus, edema isn’t a disease; it is caused by the absorption of too much water. The plant needs to rid itself of the excess but the cool weather conditions don’t allow it to transpire through its leaves or turn it into more fruit or plant. As the plant cells swell with water, they enlarge and burst. The resulting area heals, forming a scar that is dry, corky, and raised. Edema is usually pretty minor on pumpkins, but when it afflicts greens or kale, it can be serious. It will not affect the outcome or flavor of the fruit; it is just some harmless scarring.

If, however, you see signs of edema on your pumpkins and the weather hasn’t been overly cool and wet, you need to either examine your irrigation practices and/or the area of the pumpkin patch. The pumpkin patch may be at a low point in the yard and susceptible to collecting water.