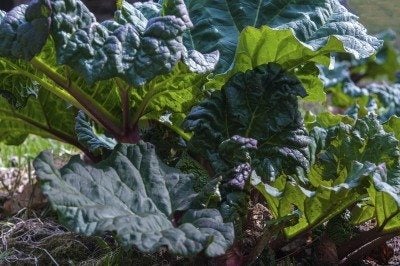 You know how some people are cat people and some are dog people? The same seems to be true with cake vs. pie lovers and I fall into the cake lover category with one exception– strawberry rhubarb pie. If some of you southern pie lovers would like to sample this culinary delight, perhaps you are wondering about growing rhubarb in warm regions. Up here in the north, we grow rhubarb as a perennial, but what about planting rhubarb in the south?

Since I’m from one of the northern states, I just assumed that growing rhubarb in warm climates, such as most of the southern regions of the nation, was out of the question. Good news! I’m wrong!

Before we dive into just how growing rhubarb in warm regions is possible, read on for some fascinating facts regarding this vegetable; yes, it’s a vegetable. It is also a cousin to buckwheat and garden sorrel and is native to China where it dates back to 2,700 B.C. Up until the 1700s, rhubarb was used solely for medicinal purposes and, by 1800, found its way into the northern gardens of the United States. In these northern gardens, rhubarb is grown as a perennial with harvest time from late spring through the summer.

Southern gardeners have tended to meet with failure when trying to grow rhubarb. They usually purchase dormant root plants to plant as a perennial. The combination of scorching summer heat combined with fungal rot is usually the coup de grace. Okay, but I did say that rhubarb growing in hot climates was possible. How do you go about planting rhubarb in the south?

How to Grow Rhubarb in Warm Regions

In the southern regions, you can grow rhubarb either from crowns (dormant root plants) or from seed. If you are using crowns, purchase them as early as possible in the spring so their dormancy has been broken, or in the late summer. If you get them in the late summer, you need to cold storage the plants for six weeks. Plant the crowns in the late fall to early winter.

If you’re going to start your rhubarb from seed, soak the seeds in warm water for a few hours and then plant them in 4-inch (10 cm.) pots filled with potting mix, two seeds per pot. Cover the seeds with ¼ inch (6 mm.) soil and keep them inside at room temp, moist but not wet, until they emerge. At a week old, start fertilizing the seedlings with a dilute liquid plant food as you water them, and move them into a bright window location.

Once the seedlings are 4 inches (10 cm.) tall or have three to five leaves, you can plant them in the garden. It’s helpful to incorporate several inches (7.5 cm.) of compost into the soil and to plant in raised beds to aid in draining. If your weather is still hot, create a makeshift shelter to protect them until they have acclimated. Keep the plants moist, but not wet, as rhubarb is susceptible to fungal rot. Fertilize them monthly from September through April.

Even though rhubarb is a cool-weather vegetable, a hard freeze will damage the ground leaves and petioles, so give the plant some protection if a cold snap is forecast. By spring, the plant should be ready for harvest. In some areas, rhubarb will be greener than red due to the warmer climate or genetic variability. It may not be as vibrant but if you mix in some strawberries (which in many warmer regions mature at the same time), you will still have a lovely red-hued, absolutely sublime strawberry rhubarb pie.