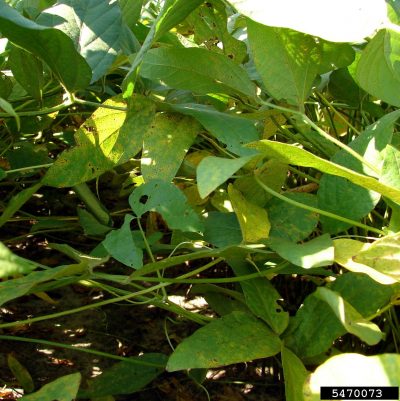 There is a disease that has so terrorized the soybean growing community that at one point it was listed as a possible weapon of bioterrorism! Soybean rust disease was first discovered in the continental United States in late 2004, brought in on the heels of a Gulf Coast hurricane. Prior to its discovery here, it has been a scourge in the eastern hemisphere since the early 1900’s. Today, it is important for growers to identify what soybean rust is, soybean rust symptoms, and how to control soybean rust.

What is Soybean Rust?

Soybean rust disease is caused by one of two different fungi, Phakopsora pachyrhizi and Phakopsora meibomiae. P. meibomiae, also called the New World type of soybean rust, is a weaker pathogen that is found in small areas of the western hemisphere.

P. pachyrhizi, called Asian or Australasian soybean rust, on the other hand, is far more virulent. First reported in Japan in 1902, the disease was only found in tropical to semitropical regions of Asia and Australia. Today, however, it has spread rampantly and is now found in Hawaii, throughout Africa, and into most of South America.

The symptoms of soybean rust are indistinguishable to the eye when caused by either of the two pathogens. The most common sign of soybean rust is a small lesion on the surface of a leaf. This lesion darkens and may be dark brown, reddish brown to tan, and gray green. The injury may be angular to circular in shape, starting as small as a pinpoint.

The lesions often grow together killing off large areas of leaf tissue. Soybean rust is found first on the lower leaves at or near flowering but gradually lesions move into the middle and upper canopy of the plant.

Cone-shaped pustules filled with spores appear on the lower leaf surface. They first appear as small, raised blisters but as they mature, begin to produce light colored, powder spores which mound up out of the pustule. These tiny pustules are difficult to see with the eye, so a microscope will help to identify the disease at this stage.

These pustules may grow anywhere on the plant but are most commonly found on the undersides of leaves. Infected foliage may appear mosaic and leaves may yellow and drop.

The disease can’t overwinter in areas of freezing temps, but it can spread rapidly over very large areas via wind. The rapid development of the disease can decimate a soybean crop, causing defoliation and premature plant death. In countries where soybean rust has been established, crop losses run from between 10% to 80%, so it is imperative that growers learn all they can about soybean rust control.

How to Control Soybean Rust

Soybean rust disease thrives with temps of 46 to 82 degrees F. (8-28 C.) with lengthy periods of leaf wetness. Spore production continues for weeks, spewing vast numbers into the air where they are easily spread by wind. It survives the winter months on host plants such as kudzu or one of over 80 other hosts in the southern United States, making it a difficult disease to control.

So how do you manage soybean rust? Foliar fungicides are the tool of choice and only a few are labeled for use against soybean rust. Your local extension office can help you determine which fungicides might be useful.

Fungicides need to be applied upon early infection, however, quickly covering the entire canopy of the plant. The number of fungal applications needed is dependent upon how early in the season the disease is caught and weather conditions.