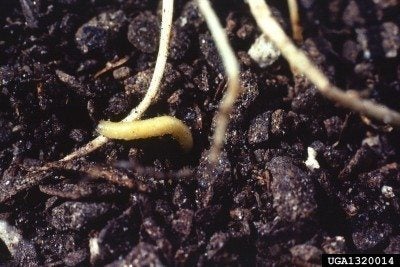 There’s a belief among gardeners that the best corn you’ll ever have is plucked from the garden and immediately taken to the grill –kids on farms sometimes have races to see who can get the maple-honey sweet ears from the field to the cook first. Of course, being kids, they may not know to watch for corn rootworm injury, a potentially serious problem of corn stands large and small.

If you’re looking for corn rootworm information, you’ve come to the right place. Read on to learn more about the corn rootworm beetle and how to control it on your home-grown corn.

What are Corn Rootworms?

Corn rootworms are the larval stage of the corn rootworm beetle, a pollen-feeder that can cause considerable damage to corn and soybeans. These yellow-green beetles are elongated, measure up to about 5/16 inches (8 mm.) in length and bear black stripes of various widths or spots on their wing covers.

Larval rootworms remain in the soil, feeding on the roots of maturing corn and soybeans. Sometimes, these pests tunnel into the root itself, causing them to turn brown, or chew them back to the crown of the plant. Occasionally, rootworms burrow into the crown of the plant as well. All this damage reduces available water and nutrients, causing the plant considerable stress as it’s trying to develop corn or soybeans.

Control of corn rootworm beetle is difficult in the home garden, since many control methods are limited to commercial producers. However, if your corn stand is small, you can always handpick adults as soon as they appear on your silks and drop them into a bucket of soapy water. Check every day, carefully looking under each leaf as well as in silks. Hand-picking requires some determination, but if you can break the life cycle of the corn rootworms, you’ll have a better corn crop.

Crop rotation is very effective prevention, provided you don’t rotate with soy or other legumes. Corn rootworms in some areas have developed a taste for these wholesome beans and their cousins, so choose something significantly different to rotate with your corn. Tomatoes, cucumbers, or onions may be better choices, depending on your garden configuration.

Planting early corn is another way many home gardeners avoid these pesky insects. Corn that pollinates from late April to mid May avoids trouble from the adult beetles, which emerge in late May or June.