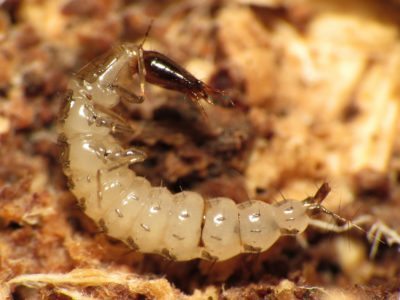 What are rove beetles? Beetles are a huge group of insects, and rove beetles are one of the largest beetle families of all, with thousands of species in North America and around the world. Rove beetles are found in moist habitats ranging from lakeshores, beaches and tropical forests to prairies, alpine timberline, arctic tundra, and even the garden.

Due to the wide diversity between species, in-depth rove beetle identification is beyond the scope of this article. However, there are a few common identifying factors to watch for. In general, rove beetles have short front wings, giving them the appearance that they are poor flyers, but longer hind wings hidden under the short wings allow them to fly very well.

Most rove beetles have large heads and prominent eyes. Many are slender with long bodies, looking similar to earwigs without pincers. Most are medium size, but some are as large as 1 inch (2.5 cm.) in length. Many rove beetles are brown, grey or black, some with grey markings on the abdomen and wings.

Understanding the life cycle of rove beetles is one way of helping with identification of these insects. Female rove beetles lay clusters of white to cream color, round or pear-shaped eggs where a food source for offspring is nearby – usually in rotten wood, plant matter, or in the soil. The eggs, which are minute, are difficult to see.

Rove beetle larvae, which overwinter in leaf matter or in the soil, have a flat appearance. They are generally off-white with brownish heads. Pupa, which are usually immobile, are off-white to yellowish, with a segmented abdomen and three pairs of long legs. The head capsule is well developed, with visible antennae, compound eyes and chewing jaws. Pupation occurs in the soil or in decomposing plant debris.

The emerging adults are very active, especially during the night. Both the larvae and adults are voracious scavengers and predators that eat nearly anything they can catch. Unfortunately, their diet includes bees and butterflies, but rove beetles are primarily beneficial predators, preying on aphids, bark beetles, mites, mosquitoes and other unwanted pests. Most feast on small to midsize insects, but some are large enough to prey on caterpillars, slugs and snails too.

Some types of rove beetles have rather unpleasant habits, living in dung and dead carcasses where they dine on fly maggots.