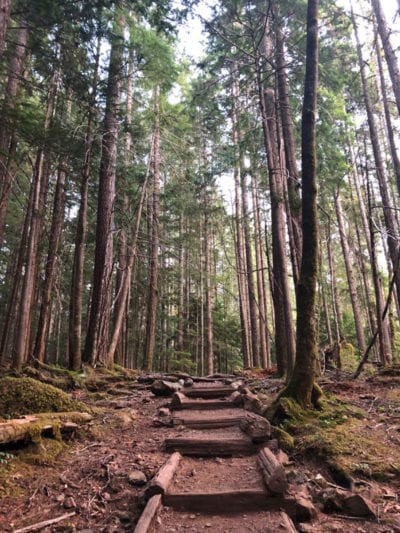 The West Coast is unparalleled in size, longevity, and density of the many varieties of Pacific Northwest conifers. Coniferous plants are also unrivaled in the sheer volume of organisms that call these trees home. Conifers in northwest U.S. have evolved over time to fill a specific niche in this temperate region.

Interested in growing coniferous plants for the Pacific Northwest? While conifers native to this region fall into just three botanical families, there are plenty of choices.

The Pacific Northwest is a region that borders the Pacific Ocean on the west, the Rocky Mountains on the east, and from central coastal California and southern Oregon up into the southeast Alaskan coast.

Two groups of fir trees reside in the Pacific Northwest, true firs and Douglas fir. Douglas firs are the most common conifer in Oregon and are, in fact, its state tree. Strangely, Douglas firs are not actually firs but are in a genus of their own. They have been incorrectly identified as fir, pine, spruce, and hemlock. True firs have erect cones while Douglas fir cones point downward. They also have pitchfork-shaped bracts.

Of the true fir trees (Abies), there are the grand fir, Noble fir, Pacific Silver fir, subalpine fir, White fir, and red fir. The cones of Abies firs are perched atop the upper branches. They break apart at maturity leaving a spike on the branch. Their bark is smooth with resin blisters on young stems and on large trunks alternately furrowed and smooth. Needles either lie in flat rows or curve upwards but all come to a soft, non-prickly, point.

Other Coniferous Plants for Pacific Northwest

Pines are the most common conifer in the world but don’t actually do that well in the dark, damp, and dense forests of the Pacific Northwest. They can be found in the open forests of the mountains and east of the Cascades, where the weather is drier.

Pines have long, bundled needles and can usually be identified by the number of needles in a bundle. Their cones are the largest of the coniferous plants in the region. These cones have thick, woody scales.

Ponderosa, Lodgepole, Western, and Whitebark pines grow throughout the mountains while Jeffery, Knobcone, Sugar, and Limber pines can be found in the mountains of southwestern Oregon.

Spruces have needles much akin to Douglas firs but they are sharp and pointed. Each needle grows on its own small peg, a unique feature of spruces. The cones have extremely thin scales and the bark is gray and scaled. Sitka, Engelmann, and Brewer are spruce confers in the northwest U.S.

Larches are dissimilar from other conifers in the area. They are actually deciduous and drop their needles in the fall. Like pines, the needles grow in bundles but with many more needles per bundle. Western and Alpine larches can be found in the Pacific Northwest on the east side of the Cascades and high in the North Cascades of Washington respectively.

North American cedars are different than those of the Himalayas and the Mediterranean. They belong to four genera, none of which are Cedrus. They have flat, scale-like leaves and stringy-looking bark and all belong to the Cypress family. The Western Red cedar is the most common of these regional coniferous plants but Incense, Alaska, and Port Orford cedars occur rarely in some areas.

Yews are unlike other Pacific Northwest coniferous plants. Their seeds are contained in small, red, berry-like fruit (aril). Although they do have needles, since yews lack cones, their position as a conifer has been called into question. New research suggests that the arils are actually modified cones. Only the Pacific yew is native to the Pacific Northwest and can be found in shaded areas of low to medium elevation.