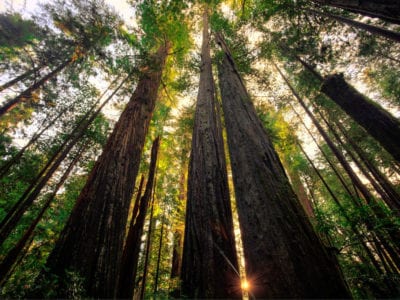 Conifers are evergreen shrubs and trees that bear leaves that look like needles or scales. The conifers of the western states range from fir, pine, and cedar to hemlocks, juniper, and redwoods. Read on for more information about western region conifers including West Coast conifers.

Conifers of the Western States

Conifers in California and other western states make up a large percentage of the forests, particularly in the higher elevations and across the Sierra Nevada mountains. Many conifers can be found near the coast as well.

The largest conifer family is the pine (Pinus) family including pine, spruce, and fir. Many species of pine are found among western region conifers. These trees have foliage that looks like needles and develop seed cones looking like scales whorled about a central axis. West Coast conifers in the pine family include:

If you are wondering where California’s iconic redwoods come into the conifer picture, they are part of the second largest conifer family in California, the cypress family (Cupressaceae). There are three species of redwoods in the world but only two are native to the West Coast.

If you have ever driven through the redwood parks near the Pacific Coast, you have seen one of the redwood species. These are California coastal redwoods, found in a narrow range near the ocean. They are the tallest trees in the world and depend on ocean fog for irrigation.

The other redwood conifers that are California natives are the giant sequoias. These are found in the Sierra Nevada mountains and are the biggest trees in the world.

Apart from the redwoods, the cypress family conifers have scale-like leaves and tiny cones. Some have flattened branches or branches look like a coarse fern. These include:

Other cypress trees native to the western regions have twigs that branch in three dimensions. These West Coast conifers include cypresses (Hesperocyparus) with egg shaped or round woody cones, and junipers (Juniperus) with fleshy seed cones that look like berries.

The best known cypress in California is Monterey cypress. The only standing natives that remain are found around Monterey and Big Sur on the central coast. However, the tree, with its deep green foliage and spreading branches, has been cultivated in many coastal areas.

Five types of junipers can be counted among native conifers in California:

Printer Friendly Version
Read more about West
<PreviousNext>
Did you find this helpful? Share it with your friends!
FacebookTweetPinEmail
Related Articles
Newest Articles
You might also like…
Additional Help & Information