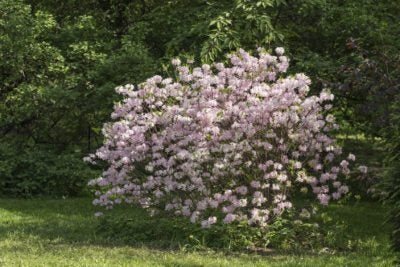 Rhododendrons are so beloved they have a common nickname, Rhodies. These wonderful shrubs come in a wide array of sizes and flower colors and are easy to grow with little maintenance. Rhododendrons make excellent foundation specimens, container plants (smaller cultivars), screens or hedges, and standalone glories. It used to be that gardeners in the north couldn’t take advantage of these standout plants because they could be killed in the first hard freeze. Today, rhododendrons for zone 4 are not only possible but a reality and there are several plants from which to choose.

Rhododendrons are found native in temperate regions of the world. They are outstanding performers and landscape favorites due to their large, showy flowers. Most are evergreen and start blooming in late winter well into the summer. There are many rhododendrons for cold climates as well. New breeding techniques have developed several cultivars that can withstand zone 4 temperatures with ease. Zone 4 rhododendrons are hardy from -30 to -45 degrees F. (-34 to -43 C.).

Botanical scientists from the University of Minnesota, an area where much of the state is in USDA zone 4, have cracked the code on cold hardiness in Rhodies. In the 1980’s, a series called Northern Lights was introduced. These are the hardiest rhododendrons ever found or produced. They can withstand temperatures in zone 4 and even possibly zone 3. The series are hybrids and crosses of Rhododendron x kosteranum and Rhododendron prinophyllum.

There are also several other very hardy rhododendron hybrids on the market.

Other Rhododendrons for Cold Climates

One of the hardiest rhododendrons for zone 4 is PJM (stands for P. J. Mezitt, the hybridizer). It is a hybrid resulting from R. carolinianum and R. dauricum. This shrub is reliably hardy to zone 4a and has small dark green leaves and lovely lavender flowers.

Another hardy specimen is R. prinophyllum. While technically an azalea and not a true Rhodie, Rosehill azalea is hardy to -40 degrees F. (-40 C.) and blooms in late May. The plant gets only about 3 feet (1 m.) tall and has exquisite rose-pink flowers with heady fragrance.

Botanists are continually making inroads into increasing cold hardiness in marginal plants. Several new series seem promising as zone 4 rhododendrons are still in trials and not widely available. Zone 4 is a tough one due to its extended and deep freezes, winds, snow, and short growing season. The University of Finland has been working with hardy species to develop even hardier rhododendrons that can withstand temperatures down to -45 degrees F. (-42 C.).

The series is called Marjatta and promises to be one of the hardiest Rhodie groups available; however, it is still in trials. The plants have deeply green, large leaves and come in a host of colors.

Even hardy rhododendrons will survive harsh winters better if they have well-draining soil, organic mulch, and some protection from harsh wind, which can desiccate the plant. Choosing the right site, adding fertility to soil, checking soil pH, and loosening the area well for roots to establish can mean the difference between a marginally hardy rhododendron surviving an intense winter and the other extreme, which is death.