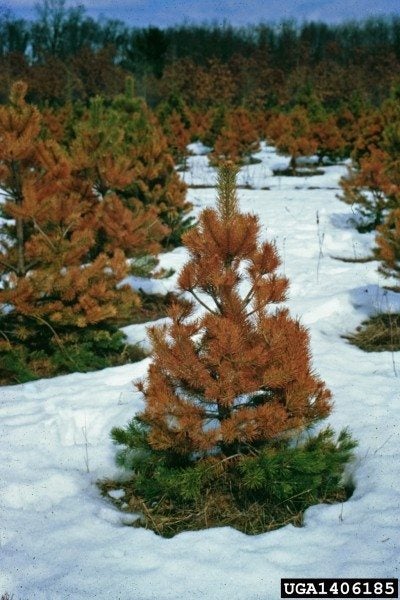 Winter is a tough season for plants everywhere, but it’s hardest where the temperatures are below freezing, and drying winds are common. When evergreens and perennials are subjected to these conditions, they often end up with browning leaves, either immediately following a drying event or months later. Desiccation damage in winter is an all-too-common problem that can lead to the death of formerly healthy plants.

Desiccation, in a broad sense, is what happens when a great deal of moisture is removed from a substance. Whether that substance is a gas or a solid, it’s the same process. When we talk about desiccation in plants, we’re specifically referring to the transfer of excessive amounts of water from leaves and into the atmosphere. As a part of their normal respiratory functions, plants tend to release some moisture, but it’s usually not a problem since they’re also bringing in new fluids from their roots at the same time.

Winter desiccation happens when one of two situations is present. In one, the plant is rooted in frozen ground, but is trying to continue its metabolic processes anyway. In the other, there’s an external force removing more moisture than the plant would normally release, like a very dry wind. The first scenario is a lot easier to manage than the second, but both are treated similarly.

Once your plant is damaged by desiccation, there’s no going back– those brown tissues are just dead. However, you can take steps to protect your plant from further damage throughout the year. Even though winter desiccation is the most dramatic, plants are at risk of desiccation all year long. Since desiccation is most common in newly transplanted trees and shrubs, or those that aren’t well, it pays to spend some extra time and care on these plants.

Start by putting them on a watering schedule. Although they might not need water every week, make sure you’re giving plenty of water between rainstorms. The exact amount will depend on the size of your plant and its watering requirements, but lawn irrigation won’t be enough. Bigger plants need much more water– in the neighborhood of several inches (8 cm.) every week. Keep this up as long as you can, watering until the ground is frozen. A properly hydrated tree or shrub is going to be able to hold out a lot longer against desiccating winds due to their extra supply of water.

To help your plants hold on to the water you give them, mulch the root zones with 2 to 4 inches (5-10 cm.) of organic mulch. For trees and large shrubs, these mulched zones may spread several feet (1 m.) away from the plant itself. Make sure to refresh your mulch yearly, at least until the plant is established. This process takes about five years, depending on the type of tree or shrub you’re growing.