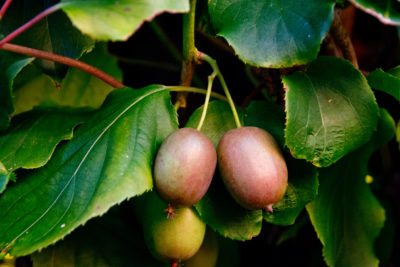 Kiwi fruit used to be a rather exotic fruit but, today, it can be found in almost any supermarket and has become a popular feature in many home gardens. The kiwi found at the grocers (Actinidia deliciosa) is imported from New Zealand and can only survive temperatures down to 30 to 45 degrees F. (-1 to 7 C.), which is not an option for many of us. Luckily, there are several varieties of kiwi that are suited as zone 5 kiwi vines, and even some that will survive temps into zone 3. The following article contains information on types of kiwis for zone 5 and growing kiwi in zone 5.

About Kiwi Plants in Zone 5

While the kiwi fruit found at the supermarket requires temperate conditions, there are also some hardy and even super-hardy kiwi varieties available that will ensure success when growing kiwis in zone 5. The fruit is generally smaller, lacking the exterior fuzz and is, thus, great for eating out of hand without peeling. They have a wonderful flavor and are higher in Vitamin C than many other citruses.

Hardy kiwi fruit tolerate temperatures as low as -25 degrees F. (-32 C.) or thereabout; however, they are sensitive to late spring frosts. Since USDA zone 5 is designated as an area with the lowest temp being -20 degrees F. (-29 C.), making hardy kiwi a perfect choice for zone 5 kiwi vines.

Types of Kiwi for Zone 5

Actinidia arguta is a type of hardy kiwi plant suited for growing in zone 5. This native to northeastern Asia has grape-sized fruit, is very ornamental and vigorous. It can grow up to 40 feet (12 m.) in length, although pruning or training the vine can keep it in check.

The vines bear small white flowers with chocolate centers in early summer with a lovely aroma. Since the vines are dioecious, or bear male and female flowers on separate vines, plant at least one male for every nine females. The greenish yellow fruit appear in summer and into the fall, ripening late into autumn. This variety usually fruits by its fourth year with a full crop by its eighth.

Once established, this hardy kiwi can live for 50 or more years. Some of the cultivars available are ‘Ananasnaja,’ ‘Geneva,’ ‘Meader,’ ‘MSU,’ and the 74 series.

One of the few self-fruitful hardy kiwis is A. arguta ‘Issai.’ Issai bears fruit within one year of planting on a smaller vine that works well container grown. The fruit is not as flavorful as the other hardy kiwis, however, and it is prone to spider mites in hot, dry regions.

A. kolomikta is an extremely cold hardy kiwi, again with smaller vines and fruit than other hardy kiwi types. The foliage on this variety is extremely ornamental on the male plants with splashes of white and pink. ‘Arctic Beauty’ is a cultivar of this variety.

Another cold hardy kiwi is A. purpurea with cherry sized, red fruit. ‘Ken’s Red’ is an example of this type with sweet, red-fleshed fruit having a hint of tartness.

Any of the hardy kiwis should have some form of trellis system or other support. Avoid planting hardy kiwi in frost pockets. Plant them instead on northern exposure sites that delay early spring growth which, in turn, protects the vines from damage caused by potential late frosts. Prune the vines two to three times per year during the growing season and again in the winter.