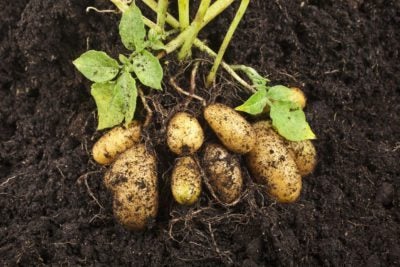 Americans eat around 125 pounds (57 kg.) of potatoes per person each year! So, it’s really no wonder that home gardeners, wherever they may live, would like to try their hand at growing their own spuds. The thing is, potatoes are a cool season crop, so what about potatoes for say, zone 9? Are there hot weather potato varieties that might be more suitable for growing potatoes in zone 9?

Although considered a cool season crop, potatoes actually grow in USDA zones 3 to 10b. Zone 9 potato growers are actually quite lucky. You can plant some late maturing varieties in early summer for a fall harvest and/or plant early potato varieties and midseason types a few weeks prior to the last spring frost date for your area.

This area also has optimal conditions for growing “new” potatoes in zone 9, small immature spuds with thinner skins than full grown potatoes, in the winter and spring months.

Types of Potatoes for Zone 9

Early potato choices for zone 9 that mature in less than 90 days include:

Midseason potatoes, those that mature in around 100 days, include Yukon Gold and Red LaSoda, an excellent choice for warmer regions.

Late potatoes such as Butte, Katahdin, and Kennebec, mature in 110 days or more. Late maturing potatoes include a number of fingerling varieties that can also be grown in zone 9.

Potatoes do best in well-draining, loose soil. They need consistent irrigation for tuber formation. Start to hill up around the plants before they bloom when they are about 6 inches (15 cm.) tall. Hilling potatoes keeps them from getting sunburned, a real threat in warmer climates, which also causes them to turn green. When potatoes turn green, they produce a chemical called solanine. Solanine makes the tubers taste bitter and is also toxic.