Home › Gardening How To › Watering 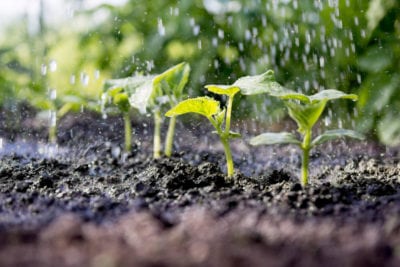 Many gardeners use either a water-soluble fertilizer or a slow-release fertilizer to feed plants but there’s a new method called fertigation. What is fertigation and does fertigation work? The following article discusses how to fertigate, if fertigation is good for plants, and includes some basic fertigation guidelines.

The name might give a clue as to the definition of fertigation. Simply put, fertigation is a process that combines fertilization and irrigation. Fertilizer is added to an irrigation system. It is most commonly used by commercial growers.

Fertigation rather than traditional fertilization approaches is purported to target the plant’s nutrient deficiencies more effectively. It also reduces soil erosion and water consumption, reduces the amount of fertilizer utilized, and controls the time and rate it is released. But does fertigation work in the home garden?

Is Fertigation Good or Bad for Plants?

Many plants need supplemental nutrients not found in the soil. Of course, amending the soil with generous amounts of organic compost is ideal, but not always practical for one reason or other. So, fertigation may supply a combination of any of the following:

Unfortunately, both control and uniformity are compromised using fertigation in the home garden. The fertilizer gets applied at the same rate to everything and not every plant has the same nutrient requirements or at the same time. Also, if the fertilizer isn’t mixed well in the water, there is a danger of foliage burn. On this account, a fertigation guide can direct you on how to solve the issue by adding several feet (1 to 1.5 m.) of pipe between the first sprinkler head or emitter and the injector.

How Does Fertigation Work?

Fertigation is all the rage at the moment and is indispensable in an agricultural setting, but in the home garden, it has some questionable attributes.

Fertigation via aerial spray nozzles produces a mist that drifts easily which may affect your neighbor’s garden as well. Also, fertilizer sprays that drift onto vehicles should be washed off ASAP. If, for instance, the spray drifts onto your neighbor’s car and is left overnight, it can damage the paint.

In addition, because the fertilizer used is often a chemical, a reduced pressure backflow preventer should be in use. Most home gardeners don’t have one and they are a bit pricey.

Home sprinkler systems often have a significant runoff, runoff that contains fertilizer that will then spread to waterways where it encourages algae and non-native weed growth. Nitrogen, the most common nutrient applied via injection, easily evaporates into the air, which means that you may actually be backsliding in terms of feeding the plants.

How to Fertigate Plants

Fertigation requires either a suitable irrigation system with a backflow preventer or a DIY setup that adapts an existing drip irrigation system with valves, pumps, emitters, and a timer. Once you have a setup, you need to decide how often to fertilize, which isn’t an easy question to answer since everything from the grass to the trees will have a different schedule.

A general fertigation guide for lawns is to fertilize 4-5 times per year, at the bare minimum, twice a year. Apply the fertilizer when the grass is actively growing. In the case of cool-season grasses, fertigation should occur twice, once after winter dormancy and again with nitrogen-rich food in the early fall. Warm grasses should be fertilized in the spring and again in the late summer with a fertilizer that is heavy on nitrogen.

As to other perennials and annuals, fertigation isn’t the ideal fertilization method since each plant’s needs will be unique. A better idea is to apply a foliar spray or to dig in slow-release fertilizer or organic compost. That way each individual plant’s needs can be met.

Printer Friendly Version
Read more about Watering
<PreviousNext>
Did you find this helpful? Share it with your friends!
FacebookTweetPinEmail
Related Articles
Newest Articles
You might also like…
Additional Help & Information