Euphorbia
By: Becca Badgett, Co-author of How to Grow an EMERGENCY Garden
Printer Friendly Version 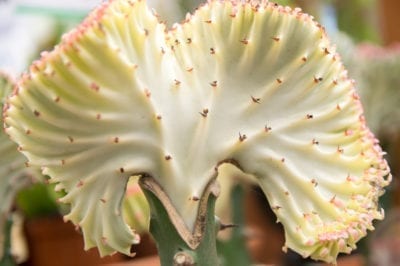 Candelabra cactus stem rot, also called euphorbia stem rot, is caused by a fungal disease. It is passed to other plants and attacks by splashing water, soil, and even peat. The tall stems of euphorbia begin to rot at the top of the limbs once the fungus takes hold. Read on for more information about this disease.

The damage is particularly prevalent in plants grown in a greenhouse. Stem rot on a candelabra cactus (Euphorbia lactea), in particular, is often mistaken for corking or sunburn, but it is generally rot. If the brown place is soft, consider it rotten. Remove it from the area of healthy plants and seclude the diseased plant until you can work with it.

The entire stem will normally die. You may be able to cut out around the brown area, but you must make sure to get it all. If the spines are a deterrent, you may remove the upright stem. Removing the stem is the best practice. While it seems a shame, stem rot on a candelabra will continue to spread.

Once the limb is removed, you may remove the rotted area, cut the healthy parts in pieces, and attempt to propagate them. Let the raw ends callous over and dip them in cinnamon before potting in a gritty soil. Sprinkle cinnamon around the open parts where you cut. Seclude infected cuttings.

Unfortunately, fungicides for this condition aren’t effective and eventually the entire plant becomes mottled and infected. You might keep it healthy enough to survive with new soil sprinkled with cinnamon along with careful and limited watering. Cinnamon has a proven anti-fungal ingredient which often helps.

It is easy to forget about splashing water and soil when you’re watering many plants in the same spot, but try to water at the roots only with a gentle stream or even a watering can. Avoid overhead sprinklers. Allow soil to dry out between waterings. Ensure there is proper air flow between plants.

Be on the lookout for brown spots, especially on the candelabra and other euphorbias growing close by.

Printer Friendly Version
Read more about Euphorbia
<Previous
Did you find this helpful? Share it with your friends!
FacebookTweetPinEmail
Related Articles
Newest Articles
You might also like…
Additional Help & Information