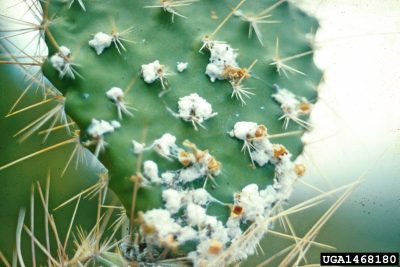 If you have prickly pear or cholla cacti in your landscape, you’ve probably been confronted with a cottony white mass on the surface of the plants. If you were to remove the mass and crush it on a piece of paper, the result would be a smear of vibrant red, a tell-tale sign of the presence of cochineal scale bugs. What is a cochineal scale and how can you treat cochineal scale? Let’s learn more.

What is Cochineal Scale?

Cochineal scale (Dactylopious spp.) bugs are commonly found on cactus of the Opuntia genera of cacti. It is an insect native to the New World, which was used by the Aztecs for dying and painting. Spanish conquistadors took dried cochineal scale powder back to their homeland where it became a sought-after red dye until the 1850’s. Cochineal dye was replaced in popularity by aniline dyes but is still commercially produced in Mexico and India where it is still used to color food, drinks, cosmetics, and paints.

These small insects suck on cacti leaves. Cochineal scale on cactus is initially a nuisance but, in extreme infestations, can weaken and kill the plant. The cottony, waxy mass is produced to shelter the female insects and their eggs. When the eggs hatch, the nymphs feed on the plant for three weeks, moving all around the plant. After their three weeks of feeding, the nymphs settle down to spin the cottony mass that shelters them from predators.

How to Treat Cochineal Scale

If the infestation of scale is minimal, cochineal scale treatment consists simply of a spray of water. Blast the affected area with hose under pressure. This will expose and weaken the scale bugs, which can then be treated with an insecticidal soap or a mix of ½ teaspoon (2.5 ml.) of dish soap to a gallon (4 L.) of water. If the problem persists, prune off the worst pads at the joints and discard them.

If the cactus seems to be heavily infested, you may have to go with a chemical cochineal scale treatment. Apply a combination of insecticide, dormant oil spray, and/or insecticidal soap. Malathion and triazide combined with Neem oil or Volck dormant oil spray should do the trick.

Apply according to the manufacturer’s directions. Do not spray on hot, sunny days, as the plant is likely to burn from the dormant oil. If the weather is too hot to use dormant oil, use pesticide mixed with dish soap.

Cochineal scale is spread around by sticking to birds’ feet, so you need to inspect the plant frequently. Spray the cactus well, paying attention to joints. Spray again in seven days and then again 14 days after the first application. You’ll know if the scale is being killed off when the white cottony tufts turn gray and squeezing them doesn’t result in a red smear. If scale is still alive after 14 to 30 days, reapply as above.