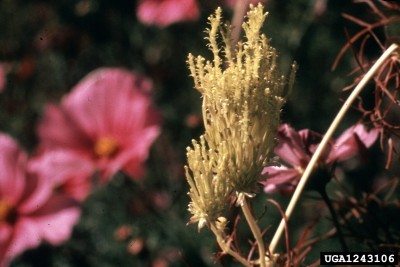 Cosmos plants are Mexican natives that are easy to grow and thrive in bright, sunny areas. These undemanding blooms rarely have any issues, but a few diseases can pose problems. Cosmos plant diseases range from fungal to bacterial and into insect vectored viruses. Controlling insects, providing proper irrigation, and planting healthy plants can minimize any problems with cosmos plants.

There are over 25 species of cosmos or Mexican aster as it is also known. Cosmos is in the Aster family of plants and its blooms have a distinct resemblance to that plant. Cosmos reseeds itself freely and is tolerant of low moisture and fertile soils. It is a very hardy plant with few special needs, and it will return year after year to brighten the garden space. If your cosmos flowers are dying during the growing season, it’s time to investigate some possible causes and save these long-blooming, feathery-foliaged plants.

Two of the most common fungal diseases of plants, Fusarium wilt and powdery mildew, can also plague cosmos plants.

Fusarium wilt not only causes the plant to wilt but discolors the stems and foliage. If you dig up the plant, you will see a pink mass on the roots. The whole plant, unfortunately, is going to die and should be destroyed to avoid spreading the fungus.

Powdery mildew spores float on the breeze and will attach to any host plant in shade. The fungus forms a powdery white coating over leaves, which will eventually cause foliage to yellow and drop off if left untreated. Plants with good ventilation, in bright light, and that are watered in the day so foliage can dry are not as susceptible to fungal diseases of cosmoses. You can also use a horticultural fungicide to fight the disease.

Bacterial wilt is one of the classic cosmos flower diseases. As it might seem, it is a bacterial disease that causes stems to wilt at the base. The entire stem and flower will become infected and finally the root system. You must dig up the plant and destroy it, as there is no cure.

Aster yellows is one of the diseases of cosmoses that affects any plant in the Aster family. It is transmitted by leafhoppers, those tiny insects that appear to be shrunken grasshoppers. The disease is caused by phytoplasma and, if infected, you will see cosmos flowers dying after becoming distorted and stunted. The foliage will present with yellowed mottling, indicating the feeding sites of the vectors. Infected plants should also be destroyed, as there is no cure.

In the garden, our plants just represent one big buffet to bugs. Cosmos plants are probably like candy to some insect pests. Most don’t do any significant damage, but a few transmit viruses and disease during their feeding activity.

Thrips transmit tomato spotted virus, a disease with no cure. Buds are delayed and distorted and when they do open, they have spotted, ringed, or lined petals.

Other sucking insects can maim the plant and diminish health. Use a good horticultural soap and quick blasts of water during the day to remove many of the pests.

Printer Friendly Version
Read more about Cosmos
<PreviousNext>
Did you find this helpful? Share it with your friends!
FacebookTweetPinEmail
Related Articles
Newest Articles
You might also like…
Additional Help & Information