What Is Fuchsia Rust – How To Control Rust In Fuchsias 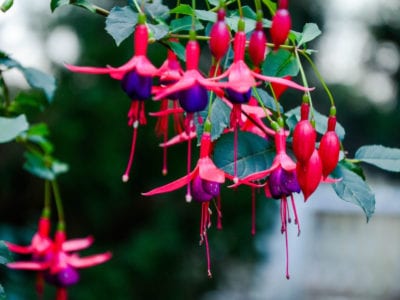 Fuchsias are a dramatic addition to the home, window box, or landscape, producing ornamental flowers that are unmatched. Though they’re generally hardy, fuchsia suffer from a few problems, including fuchsia rust. Read on to learn how to control rust in fuchsias and restore your plants to good health.

What is Fuchsia Rust?

Fuchsia plants are among the most beloved plants in gardening circles, but despite their beauty and general hardiness, they can contract a few troubling illnesses. For example, fuchsia rust may make fuchsia plants look very sickly, so much so that gardeners are disheartened and discard them. Luckily, it’s not as bad as it can look. Arming yourself with fuchsia rust information will help you better defeat this annoying fungal disease.

Fuchsia rust is a common fungal disease that attacks fuchsia as well as willowherbs/fireweed (Epilobium spp.). You’ll know it by the rust-colored spores that eventually appear on the undersides of infected leaves.

Other symptoms of fuchsia rust include yellowing on the upper surfaces of leaves in circular patches that eventually spread out or grow together to form irregular areas. Affected leaves may drop or appear deformed, and in very developed infections, spores can appear along veins and on the upper leaf surfaces.

However, for as bad as these infections can look, a plant that was healthy before infection stands a good chance of surviving if you’re willing to nurture it. Appropriate feeding and watering can give the plant the strength to fight off the pathogen. Rust depends on a live host to survive, so generally it only weakens, not kills, its victim.

How to Control Rust in Fuchsia

Fuchsia rust treatment requires a lot of patience and care, since many fungicides will damage the fragile tissues of the plant. Start by picking off any infected tissues and cleaning out any dead materials from around the plant.

Thinning the plant or moving to an area with better air circulation can also help, since fungal spores need high levels of humidity to thrive.

When fuchsia has rust all over or is plagued with it year after year, a fungicide may be helpful, but check that fuchsia is listed on the label and test a small area a few days before spraying the whole plant.

If fireweed is present in your area, eliminate as much as possible from near your outdoor plant. Fir can also vector the fungus and may warrant removal. Otherwise, a yearly fungicide can help prevent recurrent episodes of rust, but again, test and use these with caution.

Printer Friendly Version
Read more about Fuchsia
<PreviousNext>
Did you find this helpful? Share it with your friends!
FacebookTweetPinEmail
Related Articles
Newest Articles
You might also like…
Additional Help & Information