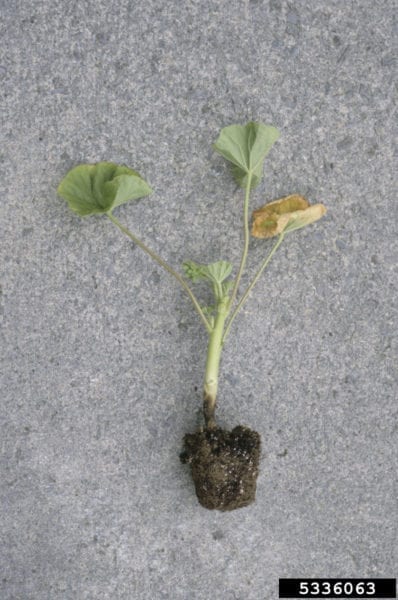 Blackleg of geraniums sounds like something straight out of a horror story. What is geranium blackleg? It is a very grave disease that most often occurs in a greenhouse during any stage of the plant’s growth. Geranium blackleg disease spreads rapidly in close quarters and can mean doom to the whole crop.

Keep reading to find out if there is any prevention or treatment for this serious geranium disease.

What is Geranium Blackleg?

By the time you discover your plant has blackleg disease, it is usually too late to save it. This is because the pathogen attacks the root, where it is impossible to observe. Once it creeps up the stem, it has already affected the plant badly enough that nothing can be done. If this sounds harsh, there are things you can do to prevent it and keep it from spreading.

If you notice your geranium cuttings are turning black, they are likely victims of some species of Pythium. The problem starts in the soil where the fungus attacks the roots. The first above ground observations are limp, yellow leaves. Under the soil, the roots have black, shiny lesions.

Fungus gnat larvae are generally present. Due to the semi-wood stem of the plant, it won’t completely wilt and fall over, but the dark fungus will go up the crown to the new shoots. In a greenhouse, it most often affects new cuttings.

Pythium is a naturally occurring soil fungus. It lives and overwinters in soil and garden debris. Excessively wet soil or high humidity can encourage the growth of the fungus. Damaged roots allow easy entry to disease.

Other factors that promote the disease are poor cutting quality, low oxygen content in soil, and excess soluble salts from too much fertilizing. Frequent leaching of the soil can help prevent the latter and avoid damage to the roots.

Sadly, there is no treatment for the fungus. Prior to installing your geranium plants, soil can be treated with a fungicide registered for use against Pythium; however, it doesn’t always work.

Using sterile soil is effective, as is developing good sanitation rituals. These include washing containers and utensils in a 10% solution of bleach and water. It is even suggested that hose ends be kept off the ground.

When geranium cuttings are turning black, it is too late to do anything. The plants must be removed and destroyed.