Impatiens And Downy Mildew: Alternatives To Planting Impatiens In The Garden 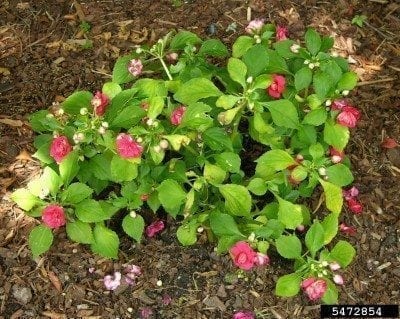 Impatiens are one of the standby color selections for shady regions in the landscape. They are also under threat from a water mold disease that lives in soil, so check those shade annuals carefully before you purchase. There is a tough disease of impatiens (called downy mildew) that is species specific and will kill the plants. It has the ability to overwinter in soil, making it a threat for years to come even if you don’t bring in affected plants. One way to avoid issues is to use alternatives to planting impatiens and give the soil a chance to get rid of the harboring mold.

What are the Causes and Symptoms?

The impatiens fungus is caused by the pathogen Plasmopara obducens, which is very difficult to control. The fungus on impatiens plants forms in cool moist or humid conditions, generally in spring or fall. Ornamental impatiens and downy mildew go hand in hand in 30 states of the Union with only a few resistant varieties available. It affects both cultivated and wild impatiens, but not New Guinea impatiens.

Downy mildew starts on the underside of the leaves and causes them to fade and develop stippling much like that seen with heavy spider mite feeding. The leaves get droopy and eventually white cottony spores will appear on the foliage. Eventually, all the leaves drop off and you have a skeleton of a plant. Without leaves, the plant can no longer feed itself with carbohydrates harvested through photosynthesis and it will wither and die. Any fungus on impatiens plants is contagious to other plants in the group but it does not affect any other ornamental species.

What to Do About Impatiens and Downy Mildew?

The impatiens fungus is actually not a fungus, but mildew, and as such doesn’t respond to fungicides. There are applications that work as a pre-emergence but once the plant has the disease, there is nothing to be done except remove it from the garden. The mold is already in the soil by that point, and it is, therefore, unwise to plant impatiens again since the pathogen can overwinter and lurk until its preferred host is in range.

Using plant alternatives for impatiens downy mildew is the best choice to prevent dying plants. There are many shade ornamentals that are suitable alternatives to planting impatiens.

Many shade ornamentals can provide the color and interest of impatiens without the danger of the mildew. Below are just a handful to choose from:

There are many more alternatives to planting impatiens that will provide the color and drama you require in your shade garden.

Printer Friendly Version
Read more about Impatiens
<PreviousNext>
Did you find this helpful? Share it with your friends!
FacebookTweetPinEmail
Related Articles
Newest Articles
You might also like…
Additional Help & Information