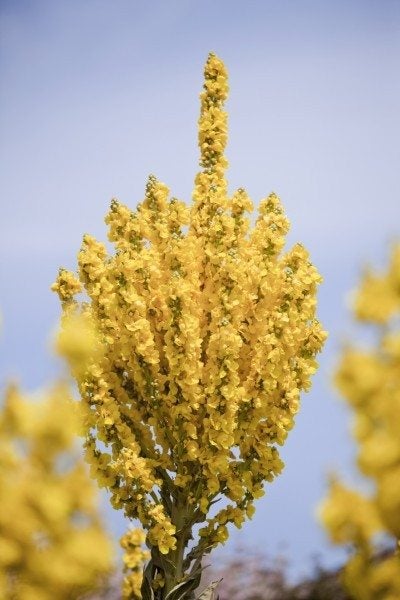 Gardeners use words like “imposing” or “statuesque” for Greek mullein plants for good reason. These plants, also called Olympic Greek mullein (Verbascum olympicum), rise to 5 feet (1.5 m.) or more, and produce such generous amounts of bright yellow flowers that, by late summer, the upper stalks are completely covered with them. Growing Olympic Greek mullein is not difficult if you plant the long-lived flowers appropriately and in the right spot.

If you’ve never heard of Olympic Greek mullein, you’ve been missing something special. This species of mullein, native to southern Greece and the Olympus Mountains in Turkey, is both attractive and elegant. Some say it is the finest plant in the Verbascum genus.

The plant’s foliage is evergreen and beautiful. The silvery felted leaves grow in broad rosettes low to the ground, almost like succulents. Each leaf can grow to a foot long (31 cm.) and 5 inches (13 cm.) wide. They lie on the ground, spread like a huge fan.

The flowers remain on the stalks most of the summer, often all the way through September. They attract many pollinators, including bees and butterflies. The plants look especially lovely in a cottage style garden.

How to Grow Greek Mullein

If you are wondering how to grow Greek mullein, it is not difficult. Direct sow the Olympic Greek mullein seeds in late summer or early fall in a garden spot with full sun and well-drained soil. If you plant in autumn, cover the seeds with a very thin layer of garden soil and a layer of organic mulch.

You can also start the seeds inside in spring. First, you’ll want to place the Olympic Greek mullein seeds, mixed with moistened growing medium, in a plastic bag in the refrigerator. Leave them there a month before planting.

Greek mullein care is not difficult in USDA plant hardiness zones 5 through 9. They grow in acidic or alkaline soil.

Provide regular water while they are developing. Once the plants are established, they require little water.