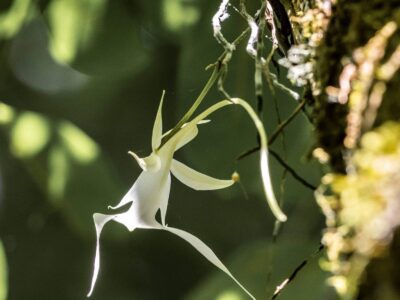 What is a ghost orchid, and where do ghost orchids grow? This rare orchid, Dendrophylax lindenii, is found primarily in humid, marshy areas of Cuba, the Bahamas, and Florida. Ghost orchid plants are also known as white frog orchids, thanks to the frog-like shape of the odd-looking ghost orchid flowers. Read on for more ghost orchid information.

Where Do Ghost Orchids Grow?

With the exception of a handful of people, nobody knows exactly where ghost orchid plants grow. The high level of secretiveness is to protect the plants from poachers who attempt to remove them from their natural environment. Like most wild orchids in the United States, ghost orchid plants are also threatened by loss of pollinators, pesticides, and climate change.

Blooms have a white, other-worldly appearance that lends a mysterious quality to ghost orchid flowers. The plants, which lack foliage, look like they’re suspended in air as they attach themselves to tree trunks via a few roots.

Experts at University of Florida Extension estimate that there are only about 2,000 ghost orchid plants growing wild in Florida, although recent data suggests there may be significantly more.

Growing ghost orchid flowers at home is nearly impossible, as it’s extremely difficult to provide the plant’s very particular growing requirements. People who manage to remove an orchid from its environment are usually disappointed because ghost orchid plants almost always die in captivity.

Fortunately, botanists, working hard to protect these endangered plants, are making great progress in devising sophisticated means of seed germination. While you may not be able to grow these orchid plants now, perhaps one day in the future it will be possible. Until then, it’s best to enjoy these interesting specimens as nature intended – within their natural habitat, wherever that is, however, still remains a mystery.