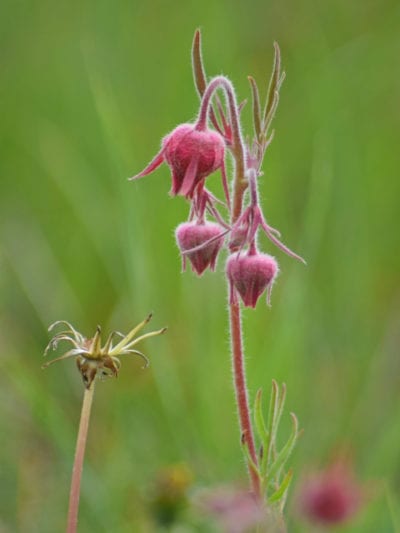 The prairie smoke wildflower (Geum triflorum) is a plant of many uses. It works well in a garden setting or in a prairie or meadow-like environment. You can use it as a groundcover, put it in a rock garden, or add it to beds and borders with other similar growing plants such as coneflower, wild flax, and liatris (blazing star). Back in the day, this plant was even used for medicinal purposes as a remedy for various illnesses.

This interesting looking plant is naturally found growing in prairies within the United States. The plant’s low-growing, fern like, gray-green foliage is semi-evergreen, turning red, orange, or purple in late fall and lasting throughout winter.

This wildflower is among one of the earliest blooming prairie plants of spring and continues through summer with nodding rose-pink colored flowers.

Blooming is soon followed by the long-plumed seedpods, which look a lot like puffs of smoke—giving the plant its name. These seedpods are also covered with hairs, which render it yet another common name of old man’s whiskers.

How to Plant Prairie Smoke

Growing prairie smoke is easy, as it’s tolerant of most any soil type, including sandy and clay soils. However, it does prefer a well-draining soil enriched with organic matter above all else. While prairie smoke can also tolerate partial shade, the plant performs much better in full sun.

It is usually planted in spring but fall planting can also be done. Plants that are started by seed indoors need to be stratified (having cold period) for at least four to six weeks prior to sowing them in late winter. Seedlings are normally ready to be planted outdoors come spring. Of course, you also have the option of sowing the seeds outdoors in fall and allowing nature to do the rest.

Prairie smoke is considered a low maintenance plant. In fact, there is little involved with prairie smoke care. While it should receive adequate moisture during spring growth, especially those newly planted, prairie smoke prefers drier conditions during the remainder of the year, as it’s quite drought tolerant in its native habitat.

While the plant typically self-seeds or spreads underground, you can save the seeds for growing elsewhere or divide the plant clumps in spring or fall. Allow the seed heads to remain on the plant until dry and golden colored before harvesting for later planting. You can also use them in dried flower arrangements by cutting entire stems and hanging them upside down in a warm, dry location.