Learn About Brown Canker on Roses 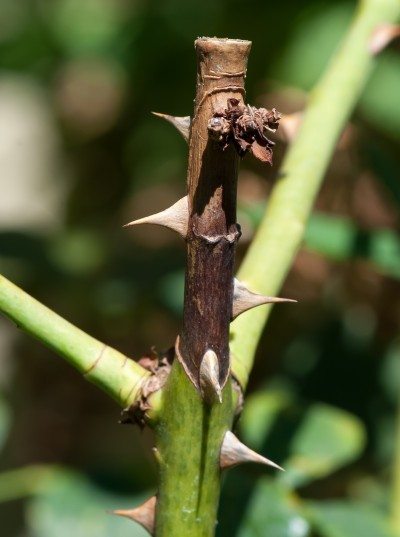 Image by Masha McLaughlin (with permission)

In this article we will take a look at brown canker (Cryptosporella umbrina) and its attack upon our rose bushes.

Brown canker causes eaten away looking spots of a light chestnut brown coloration in the centers of the canker sections with deep purplish margins around the canker affected sections. Small flecks and purple-colored spots will form upon the leaves of the infected rose bush. This fungal disease typically attacks the canes of rose bushes while they are buried under our winter protection.

Brown canker is typically worse on roses that are protected by the soil mounding method of winter protection. Adding a bit of pea gravel, or even a little mulch, to the mounding soil will help to allow some air flow within the mounding, thus not making the environment as friendly for this fungus.

Spraying down the canes of the rose bushes and the surrounding ground with a lime-sulfur dormant spray, prior to mounding the roses up with soil for winter protection, will go a long way in preventing this fungus from getting started.

Once the mounded soil for winter protection has been pulled back and any brown canker or other cankers have been discovered, it is recommended to prune out the affected cane areas. Wipe the pruners used for this with disinfectant wipes or dip pruners into a Clorox and water solution between each cutting. It is extremely important to make each cut with clean pruners or the disease will easily spread to good tissue on the same cane or other canes that are pruned with dirty pruners.

If the fungal disease is discovered and after it has been pruned out as much as possible, apply a good systemic fungicide to the entire bush and the soil immediately around the rose bush. Such application will typically gain control of this fungus along with the now good air movement around and through the rose bushes concerned. A sulfur-based fungicide appears to do a good job of controlling brown canker, but is best applied before budding starts, as the sulfur may burn or discolor foliage and buds.