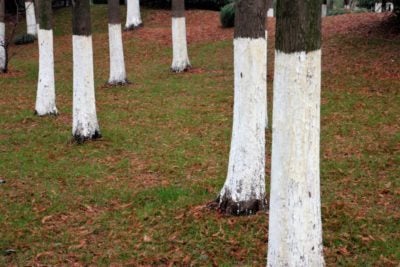 Fungi happen. Even the most experienced and dedicated gardeners will experience fungal disease on plants at some point. Fungi can affect plants in any climate and hardiness zone because, like plants, certain fungal spores grow better in different climates. Even new disease-resistant varieties can suffer from these issues. As gardeners, we can choose to spend a fortune on different chemicals that can have residual effects to treat different symptoms or we can use a natural-based product that has been used by growers and breeders for hundreds of years. Continue reading to learn about using lime sulfur in gardens.

What is Lime Sulfur?

Lime sulfur is a mixture of calcium hydroxide and sulfur. In horticultural dormant sprays, lime sulfur is usually mixed with an oil, like mineral oil, to make it stick to plant surfaces. These horticultural oil sprays contain a high concentration of lime sulfur that is only safe to use on plants that are dormant because the sulfur can burn leaf tissues.

With warnings like this, you may wonder, “Is lime sulfur safe?”. When used properly, lime sulfur is a safe and effective treatment of fungal diseases such as:

As a horticultural dormant spray, lime sulfur is safe to use even on fruits that include:

Lime sulfur is also used to treat fungal diseases of ornamental plants like:

Additionally, lime sulfur can be an effective treatment for certain pests.

How and to Use Lime Sulfur

Fungal disease spores can overwinter in cracks or fissures on plants or in soil and garden debris. For this reason, lime sulfur is used in high concentrates mixed with oil as a horticultural dormant spray. When to use lime sulfur this way is in late winter or early spring before the plant begins to leaf out. It is also a good idea to spray the soil around plants that have been previously infected or are prone to infection.

For perennials or plants that are showing new signs of fungal diseases, lime sulfur can be mixed with water and sprayed on plants anytime except for hot, sunny days. The mixing ratio is 1 tsp. per gallon (5 mL per 4 L) of water. Spray all surfaces of the plant thoroughly. Allow the mixture to sit on the plants for 15-20 minutes. Then thoroughly rinse the plants with just clear water.

Occasionally, you will notice the bottom portion of tree trunks covered with white latex paint. Sometimes, this contains a diluted mixture of lime sulfur.