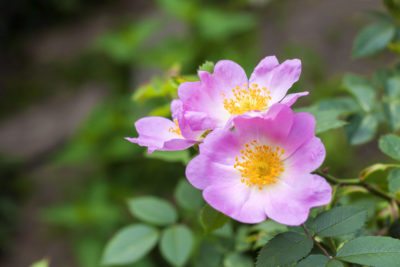 There are wild roses (species roses) that carry some interesting history with them. I have heard it said that it would be great if trees could talk to tell us of the times they have seen. The same is true of species roses, as telling of their history is truly fascinating. The dog rose (Rosa canina) is one such naturalized wild rosebush.

What is a Dog Rose?

This rose is classified by some as a climber while others classify it as a weedy shrub rose, also known as briar rose or dog briar. Like most wild rosebushes, it has a growth habit that is considered aggressive and, thus, invasive in some areas, overcoming desired plants in the garden.

The dog rose does have a rich history to share, as its medical uses date back to the time of Hippocrates. The roots, foliage, blooms, and hips were used in various prescriptions. The name was attributed to a belief many years ago that the root could be used to cure the bite of a mad (rabid) dog.

The medicinal uses of rose hips in traditional folk medications are well known and documented. During World War II, Britain could not import citrus fruits, so the government encouraged the gathering up of the dog rose hips as a source of Vitamin C, thus, used to treat vitamin C deficiency. The rose hips are currently used in medications as a diuretic and a laxative. They are used to treat kidney and lower urinary tract disorders as well as arthritis, gout, and common colds and their associated fevers.

A great source of vitamin C, rose hips can be made into jams, syrups, and tea. Petals and hips can be used to treat various digestive ailments. The seeds have been used to remove intestinal worms effectively. A distillation from the dog rose can be used as an astringent lotion for sensitive skin.

So where do dog roses grow? Dog rose plants can be found growing on the east coast of North America, from Quebec, Canada to North Carolina (USA), and west to Kansas (USA), as well as from British Columbia, Canada to California and east to Utah (USA). Again, the dog rose is considered extremely invasive and very hard to control once it gets established. The blooms and foliage are very attractive as well as the deep red to orange rose hips.

Dog rose plants seem to be a favorite of the gall forming wasps, as several galls can typically be found on this rosebush. The galls are not harmful and are merely a birth chamber or sorts for the little wasps. This rosebush is susceptible to fungal diseases such as powdery mildew and downy mildew. Birds and wildlife consume the rose hips and help spread seeds. The seeds, if the timing is right, do not necessarily require the typical stratification period to break dormancy and will grow readily. In other cases, they can take up to two years to germinate.

The dog rose reaches heights from 4 feet to 16 ½ feet (1-5 m.), depending on the age and growing conditions of the rosebush, such as having growing support to climb up. The blooms resemble classic wild rose blooms with five petals that are mildly fragrant and have a color range from light pink to white. Blooming is once a year, typically appearing from spring through summer.

Truly an amazing rosebush, the dog rose is one that can easily be overlooked and considered an invasive problem plant in some situations. That being said, you should enjoy all roses for the elements of beauty and history they bring to you.