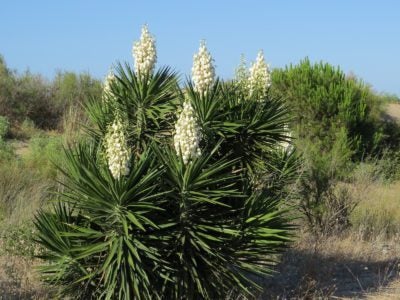 Native to the southern regions of the United States, Mexico, and other parts of Central America, the Spanish bayonet yucca plant has been used for centuries by native people for basket making, clothing, and footwear. Its large white flowers are also a sweet culinary treat, eaten raw or fried. In present time, Spanish bayonet is mostly grown as a dramatic landscape plant. Read on for more Spanish bayonet information.

What is Spanish Bayonet Yucca?

Also known as aloe yucca and dagger yucca, Spanish bayonet (Yucca aloifolia) is a hardy yucca plant that grows in zones 8 to 12. As the common name implies, Spanish bayonet yucca has very sharp, dagger-like foliage. These 12 to 30 inch (31-76 cm.) long and 1 to 2 inch (2.5-5 cm.) wide blades are so sharp that they can cut through clothing and pierce skin beneath.

Due to this, Spanish bayonet is often used in security plantings placed beneath windows around the home or as a living security fence. While you can use this sharp plant to your advantage, growing Spanish bayonet yucca near walkways or other areas frequently travelled by people and pets, especially young children, is not recommended.

Spanish bayonet yucca grows 15 feet (4.5 m.) in height. It has a clump forming habit, so plant width will vary depending on how many offshoots are allowed to grow. As plants mature, they may become top heavy and flop over. Allowing the plant to grow in clumps helps provide support to larger stems. Spanish bayonet yucca plants are available with variegated foliage in some areas.

Depending upon location, Spanish bayonet yucca produces stunning 2 foot (61 cm.) tall spikes of fragrant, white, bell-shaped flowers. These flowers last for a few weeks and are edible. The flowers of yucca plants are only pollinated by the yucca moth at night, but the sweet nectar of Spanish bayonet draws butterflies to the garden. Flower spikes can be cut back once blooming has finished.

Spanish bayonet yucca is an evergreen in zones 9 to 12 but it can suffer from frost damage in zone 8. Once established, it is drought and salt tolerant, making it and excellent candidate for seaside gardens or xeriscaping.

It has a slow to moderate growth habit and will grow in full sun to part shade. For fuller, healthier looking plants, Spanish bayonet can be cut back to 1 to 3 feet (31-91 cm.) tall every 10 to 15 years. Gardeners also sometimes snip off the sharp tips of the foliage to prevent injuries.

Spanish bayonet can be propagated by division of offshoots or by seed.