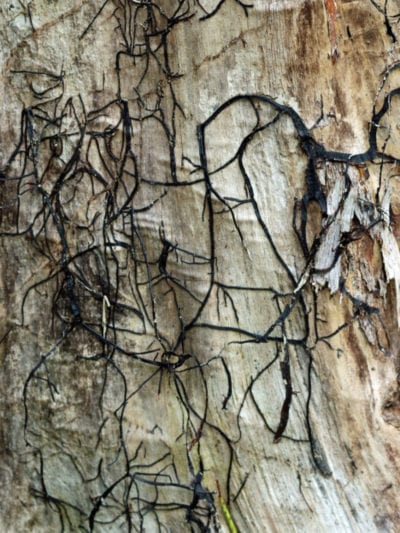 Fungi are extremely important to plant life both as partners and as enemies. They are major components of healthy garden ecosystems, where they break down organic matter, help build soil, and form partnerships with plant roots.

Most parts of fungi are microscopic. Some species produce linear strings of cells called hyphae, which by themselves are too narrow to see; others, called yeasts, grow as single cells. Fungal hyphae travel invisibly through soil and colonize food resources. However, many fungal species use hyphae to form larger structures that you might find in your garden or yard. Even mushrooms consist of many hyphae closely packed together. We’ve all seen mushrooms, but observant gardeners might be able to identify another fungal structure, the rhizomorph.

A rhizomorph is a rope-like aggregation of many hyphal strands. The word “rhizomorph” literally means “root form.” Rhizomorphs are so named because they resemble plant roots.

Rhizomorphs in a backyard or forest are a sign of a vibrant fungal community. You may have seen them in soil, under the bark of dying trees, or wrapped around decaying stumps.

Are Rhizomorphs Good or Bad?

The fungi that form rhizomorphs can be plant allies, plant enemies, or neutral decomposers. Finding a rhizomorph in your garden is not necessarily good or bad in itself. It all depends on what fungal species is the source of the rhizomorph and whether nearby plants are healthy or sick.

A plant enemy that forms rhizomorphs is the bootlace fungus (Armillaria mellea). This Armillaria species is a major cause of root rot that often kills trees and shrubs. It can infect previously healthy trees of susceptible species, or it can attack already weakened specimens of other tree species. The black or reddish brown rhizomorphs of this species grow just beneath the infected tree’s bark and in the surrounding soil. They resemble bootlaces and can reach up to 0.2 inch (5 mm.) in diameter. If you find one of these rhizomorphs on a tree, the tree is infected and will probably need to be removed.

Other rhizomorph-forming fungi are saprophytes, meaning that they live on decomposing organic material such as fallen leaves and logs. They indirectly benefit plants by building soil and playing an important role in soil food webs.

Some mycorrhizal fungi form rhizomorphs. Mycorrhizae are symbiotic alliances between plants and fungi in which the fungus delivers water and nutrients absorbed from the soil to the plant in exchange for carbohydrates the plant produces. Long-ranging rhizomorphs help the fungal partner bring in water and nutrients from a much larger volume of soil than the plant’s roots could explore on their own. These beneficial rhizomorphs are important nutrient sources for many tree species.

What Do Rhizomorphs Do?

For the fungus, the rhizomorph’s functions include branching out to search for additional food sources and transporting nutrients over long distances. Rhizomorphs on fungi can travel farther than individual hyphae can. Some rhizomorphs have hollow centers similar to plant xylem, which allows the fungus to transport larger volumes of water and water-soluble nutrients.

Rhizomorph-forming mycorrhizal fungi use these structures to locate new trees to partner with. The bootlace fungus uses its rhizomorphs to travel through soil and reach new trees to infect. This is how the fungus spreads through forests of susceptible trees.

Next time you see root-like strings in your garden soil or growing on a fallen log, think of the rhizomorph information in this article and consider that they may not be roots but a manifestation of the often-invisible fungal world.