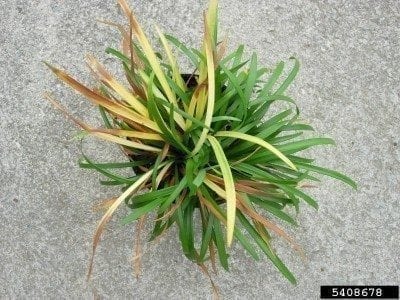 For the most part, monkey grass, also known as lilyturf, is a hardy plant. It is frequently used in landscaping for borders and edging. Despite the fact that monkey grass is able to take a lot of abuse though, it is still susceptible to disease. One disease in particular is crown rot.

What is Monkey Grass Crown Rot?

Monkey grass crown rot, like any crown rot disease, is caused by a fungus that thrives in moist and warm conditions. Normally, this problem is found in warmer, more humid states, but it can occur in cooler areas as well.

The signs of monkey grass crown rot are a yellowing of the older leaves from the base of the plant. Eventually, the whole leaf will turn yellow from the bottom up. Younger leaves will turn brown before reaching maturity.

You may also notice a white, thread-like substance in the soil around the plant. This is the fungus. There may be tiny white to reddish brown balls scattered around the base of the plant too. This is also the crown rot fungus.

Unfortunately, there is no effective treatment for monkey grass crown rot. You should immediately remove any infected plants from the area and treat the area repeatedly with fungicide. Even with treatment, however, you may not be able to rid the area of the crown rot fungus and it may spread to other plants.