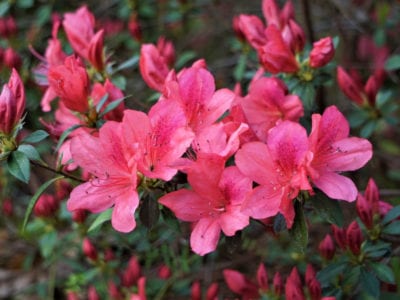 Imagine you have purchased a lovely azalea in just the color you wanted and eagerly anticipate the next season’s bloom. It might come as a shock to find your azalea blooms in an entirely different color. It may be just one or two blooms or it may be the whole plant. Do azaleas change colors? Many flowering plants change color as the bloom matures or can bear different flowers arising from the rootstock. However, azalea color change is usually something quite different and more fascinating.

There are over 10,000 cultivars of azalea. The huge diversity of size and color as well as the plant’s shade loving nature have made azaleas one of the premier landscape shrubs in many regions. Sometimes, the plants are observed having different colored azalea blooms. What can account for this since azaleas do not change flower color as they age? The anomaly is likely the result of a sport, one of nature’s little jokes as it continues to increase diversity in the world.

A sport is a genetic mutation that suddenly occurs. No one is sure if this is a response to environment, cultivation, stress, or simply as common as a human developing a mole. Sports result from a faulty chromosome replication. The resulting defect may occur only once or it may persist in the plant and be passed down to successive generations.

The sporting of azalea blooms and other plants can be a good thing. Collectors and breeders search high and low for unusual sports to breed and continue. The George L. Taber azalea is a well-known sport that is cultivated and sold the world over.

Azalea color changes may be an entire different tone, a subtle change in hue or bear interesting markings such as white speckles on the petals. In most cases, if a plant throws a sport, it will revert back the following season. Occasionally, the sport wins and the plant becomes characteristic of that new trait.

You can also save a sport by propagating that stem. When you observe different colored azalea blooms, you can cleanly remove that stem and either air or mound layer the material to cause it to root and preserve the new trait. Rooting will take some time, but you will have saved the original genetic material and assumedly it will produce the same effect.

Azaleas are just like humans and their blooms will fade as they get older. Azalea blooms turn color over time. The deep purple tones will become soft lilac in color while the magenta will fade to pink. A good rejuvenation pruning and some babying can help perk old bushes back up.

Fertilize with an acid lover’s formula in late winter to early spring but before the plant has flowered. Make sure to water it in well.

Prune azaleas before July 4 to prevent cutting off the next year’s buds. Remove 1/3 of the stems to the junction just before the heart of the plant. Remove the other stems back a foot (30 cm.), cutting to growth nodes.

In a couple of years, the plant should be fully recovered from such drastic pruning and ready to produce the deeper jewel tones of its youth.