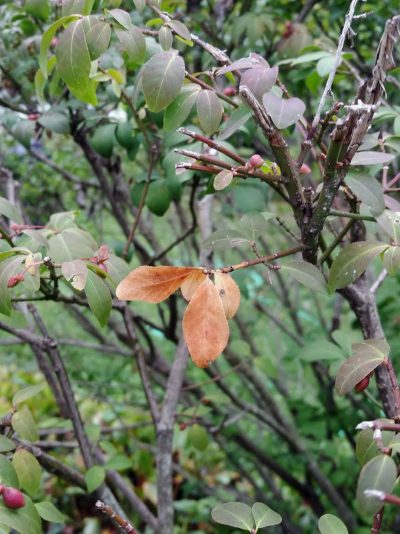 Burning bush shrubs seem to be able to stand up to almost anything. That’s why gardeners are surprised when they find burning bush leaves turning brown. Find out why these sturdy shrubs brown and what to do about it in this article.

When a shrub is said to be “resistant” to insects and disease, it doesn’t mean that it can’t happen. Even the most resistant of plants can have problems when they are weak or in poor conditions.

Regular watering and a layer of mulch to prevent cycles of dry and moist soil go a long way toward keeping the shrub healthy so that you’ll never see burning bush leaves turning brown. The shrub can store moisture and essential elements for a few months, so problems that begin in late winter and spring may not become obvious until late summer or fall. That’s why it’s important to make sure your shrub is getting enough water before you see problems.

Treat both two-spotted spider mites and euonymus scale insects with narrow-range oil or insecticidal soap. In the case of euonymus scale, you should spray before the insects hide under their shells. Since the eggs hatch over a long period of time, you’ll have to spray several times. Dead and badly infested branches should be pruned off.

You might also find the leaves on a burning bush turning brown when damaged by the euonymus caterpillar. Yellowish in color and three-quarters of an inch (2 cm.) long, these caterpillars can completely defoliate a burning bush shrub. Although a burning bush can bounce back from defoliation, repeated attacks may prove too much. Remove any egg masses or webs you find on the shrub and treat the caterpillars with Bacillus thuringiensis as soon as you see them.

You may also see brown leaves on burning bush shrubs as a result of meadow vole feedings. These little herbivores prefer the tender roots of grass and garden plants, but in winter, when there are no other food sources, they feed on the bark of burning bushes. Meadow voles feed close to the ground where they are hidden by plants and mulch, so you may not see them.

Once they chew a ring all the way around the main stem, the shrub can no longer transport water up to the higher stems. As a result, the shrub turns brown and dies. You may not see the decline until the end of summer when moisture reserves are gone. By this time, the voles are long gone, and it is too late to save the plant.