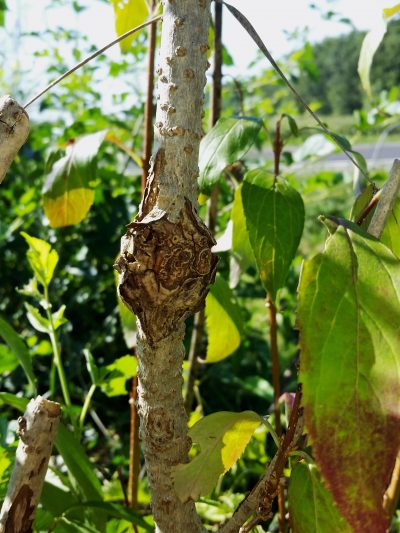 Forsythia shrubs are well-known for their beauty and tenacity, but even the toughest of these shrubs can become sickly in the presence of phomopsis galls. Read on to find out how to manage this unsightly fungus.

The bright yellow flowers of the forsythia herald spring, but when your bushes develop unusual swellings on their branches, it’s hardly a cheery start to the season. Galls aren’t uncommon problems for woody plants and trees, but unlike most common galls, forsythia phomopsis gall is caused by an aggressive fungus.

The fungus Phomopsis spp. is responsible for the irregular swellings that appear throughout affected forsythia shrubs. These galls are typically 1 to 2 inches (2.5-5 cm.) in diameter, noticeably round, and have a rough, bumpy texture. It’s easy to mistake them for galls caused by insects or mites, however, so cutting into them is necessary for proper diagnosis. When you cut through a phomopsis gall, it will be solid throughout, unlike other galls that contain chambers or have evidence of boring inside.

Initial infection occurs when fungal spores land on freshly wounded forsythia during wet weather. There is some evidence that these spores can also be spread between plants on dirty tools. If you’ve got a forsythia showing signs of galls, make sure that you sterilize your pruners between cuts in a solution of bleach water, mixed at a 1:10 bleach to water ratio.

Unlike insect galls, choosing to ignore phomopsis galls is a big mistake– they can easily kill portions of weak forsythias, causing overall decline and death.

Since the phomopsis gall fungus doesn’t overwinter in debris like many fungi, instead hanging out in the galls as an active infection, there’s a risk of transmitting this disease all year long. Watch for new growths on your forsythia, especially if they’re planted in an area that has already shown gall activity.

Treating galls on forsythia isn’t possible; the only thing you can do once they arise is to remove them cleanly. Cut infected branches off 4 to 6 inches (10-15 cm.) below the swellings, and immediately destroy the infected tissue by burning or double bagging it in plastic. Always practice good sanitation methods when working around phomopsis galls to prevent spreading them further.

Printer Friendly Version
Read more about Forsythia
<PreviousNext>
Did you find this helpful? Share it with your friends!
FacebookTweetPinEmail
Related Articles
Newest Articles
You might also like…
Additional Help & Information