Excessive Rain On Plants: How To Garden In Wet Ground 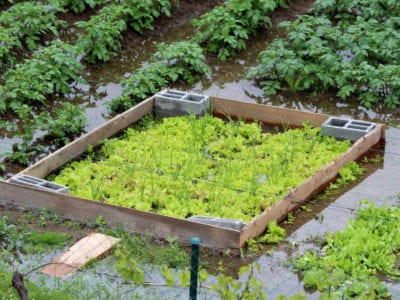 To a gardener, rain is generally a welcome blessing. Wet weather and plants are usually a match made in heaven. However, sometimes there can be too much of a good thing. Excessive rain on plants can cause plenty of trouble in the garden. Overly wet weather causes diseases via bacterial and fungal pathogens fostered by long-term moisture on foliage and root systems. If your garden is in a region of plentiful rainfall or has just been hit by storms, you might be wondering how to garden in wet ground and what are the effects of wet weather on the garden.

Effects of Wet Weather in Gardens

If your plants exhibit these symptoms, it may be too late to save them. However, by monitoring and early recognition, you may be able to avert disaster in the garden due to excessive rain on plants and the resulting diseases that plague them.

There are a number of wet weather diseases that may afflict the garden.

To combat this fungus, rake and dispose of tree detritus during the growing season and fall. Prune in the winter to increase airflow and remove infected limbs. Fungicidal sprays can work but are impractical on large trees.

Powdery mildew – Powdery mildew is another common disease caused by excessive rain. It looks like a white powdery growth on leaf surfaces and infects new and old foliage. Leaves generally drop prematurely. The wind carries powdery mildew spores and it can germinate even in the absence of moisture.

Sunlight and heat will kill off this fungus or an application of neem oil, sulfur, bicarbonates, organic fungicides with Bacillius subtillis, or synthetic fungicides.

Fire blight – Fire blight is a bacterial disease that affects fruit trees, such as pear and apple.

How to Garden in Wet Ground and Prevent Disease

As with most things, the best defense is a good offense, meaning prevention is the key to disease management during rainy seasons. Sanitation is the number one cultural technique to manage or prevent disease. Remove and burn any diseased leaves or fruit from not only the tree or plant but from the surrounding ground as well.

Secondly, select cultivars that are resistant to disease and situate them on high ground to prevent root rot. Plant only those cultivars that thrive in wet environments and avoid those that are native to drier regions.

Disease spreads easily from plant to plant when leaves are wet, so avoid pruning or harvesting until the foliage has dried off. Prune and stake the plants to improve aeration and increase dry time after heavy rainfall or dewy mornings. Improve soil drainage if it is lacking and plant in raised beds or mounds.

Remove any infected plant parts as soon as you see them. Remember to sanitize the pruners before moving on to other plants so you don’t spread the disease. Then either bag and dispose or burn infected leaves and other plant parts.

Finally, a fungicide may be applied either prior to or early in the development of disease.