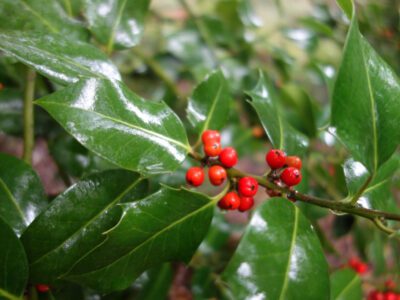 Numerous shrubs produce berries, many of which using both male and female flowers on the same plant. However, some shrubs– like holly— are dioecious, meaning they require separate male and female plants in order for pollination to occur.

Of course, in their native environments, this doesn’t pose a problem. Nature simply takes care of itself. In the home landscape, however, knowing how to tell the difference between a male and female holly bush is important. If you don’t have at least one male within close proximity of a female, pollination will not occur. As a result, there will be no berries on holly. It takes just one male to pollinate several female plants.

Male and female holly flowers grow on different plants. Although some plants may be tagged with their particular sex, this is rarely the case. Therefore, it is oftentimes up to you to determine the difference. This is not an easy task. It is nearly impossible to distinguish the male and female holly bush prior to blooming.

Generally, all females produce berries. Males do not. If you find a plant with berries, it’s usually safe to say that it is female. The best way to determine the sex of holly plants is by examining the flowers, which are located between the leaf and branch joint. Although the small clusters of creamy white flowers are similar in appearance, males have more prominent stamens than females.

There are many types of holly shrubs:

One word of caution, not all male/female names can be relied upon. Take, for example, the variegated Golden holly varieties ‘Golden King’ and ‘Golden Queen.’ The names are deceptive, as ‘Golden King’ is actually the female plant while ‘Golden Queen’ is the male.

When planting holly shrubs, place them in full sun or partial shade and well-drained soil. The best time for planting holly shrubs is fall, although spring is also suitable depending on your particular region. Warmer climates benefit from fall planting so their roots have plenty of time to take hold before the onset of hot, dry summers. Hollies should be spaced 2 to 3 feet (61-91 cm.) apart, depending on the variety used and overall size. Most types of holly shrubs have shallow root systems so add mulch.

Holly shrubs can also benefit from occasional pruning to enhance their appearance.