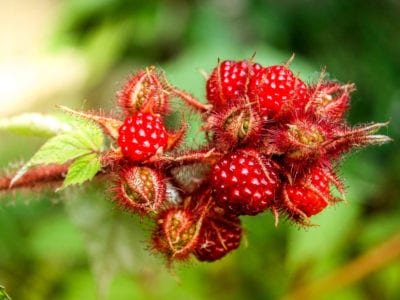 What are Japanese Wineberries?

Japanese wineberry plants (Rubus phoenicolasius) are non-native plants in North America, although they can be found from eastern Canada, New England and southern New York as well as into Georgia and west to Michigan, Illinois and Arkansas. Growing Japanese wineberries are native to East Asia, specifically northern China, Japan, and Korea. In these countries you are likely to find growing colonies of Japanese wineberries in lowland clearings, roadsides and mountain valleys. They were brought to the United States around 1890 as breeding stock for blackberry cultivars.

A deciduous shrub that grows to about 9 feet (2.7 m.) in height, it is hardy to USDA zones 4-8. It blooms in June through July with berries ready for harvest from August to September. Flowers are hermaphroditic and are pollinated by insects. The fruit looks and tastes almost exactly like a raspberry with a tinge more orange and a smaller size.

The plant has red stems covered in delicate hairs with lime green foliage. The calyx (sepals) are also peppered with fine, sticky hairs often seen littered with trapped insects. The insects play an important role in the survival of Japanese wineberry. The sticky hairs are the plants defense mechanism against sap-loving insects and serve to protect the developing fruit from them.

Also referred to as wine raspberry due to its similar mien, this cultivated berry has now naturalized throughout the eastern United States where it is often found growing alongside hickory, oak, maple and ash trees. In the inner Coastal Plains of Virginia, wineberry is found growing alongside boxelder, red maple, river birch, green ash, and sycamore.

Given that wineberry is associated with blackberries (boy, are they ever invasive) and given its widespread introduction to the ecosystem, one wonders about Japanese wineberry invasiveness. You guessed it. The plant is labeled as an invasive species in the following states:

Japanese wineberry does self-sow as its rampant spread through the eastern to southeastern states accedes. If you wish to grow your own wineberry, you can also obtain plants from many nurseries.

Grow wineberry in light, medium or heavy soil (sandy, loamy and clay, respectively) that is well draining. It isn’t picky about the pH of the soil and will thrive in acidic, neutral and alkaline soils. While it prefers moist soil conditions, it can be grown in semi-shade or no shade. The plant is perfect for a woodland garden in dappled shade to part sun.

Just as with summer raspberries, prune out the old fruiting canes when they have finished flowering to ready the plant to bear next year’s fruit.