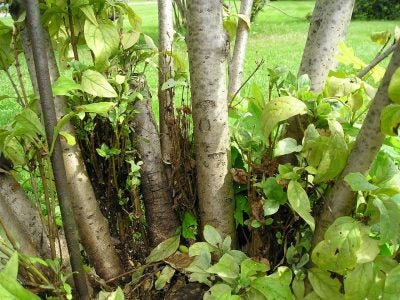 Lilac witches’ broom is an unusual growth pattern that causes new shoots to grow in tufts or clusters so that they resemble an old-fashioned broom. The brooms are caused by a disease that often kills the shrub. Read on for details about witches’ broom in lilac.

In lilacs, witches’ brooms are almost always caused by phytoplasmas. These tiny, single-celled organisms are similar to bacteria, but unlike bacteria, you can’t grow them in a laboratory. Since they couldn’t isolate them, and you can’t see them without a powerful electron microscope, scientists didn’t discover them until 1967. Many phytoplasmas still don’t have proper scientific names or descriptions, but we know that they are the cause of several plant diseases.

Witches’ brooms are the most easily recognized symptom of a lilac phytoplasma disease. The shoots that form the “broom” are short, tightly clustered, and grow almost straight up. When you see the brooms, the shrub needs immediate attention.

There are a few other symptoms that alert you to the disease:

Witches’ broom can’t be cured. Shrubs usually die a few years after the appearance of the first brooms. You can extend the life of the shrub by pruning off branches when other parts of the shrub seem unaffected. If you choose to prune, disinfect your tools thoroughly with a 10 percent bleach solution or a 70 percent alcohol solution before making the next cut.

It’s best to remove a shrub if most or all of it is showing symptoms. Early removal is the best option if there are other lilacs in the landscape. The disease is spread by insects that feed on the plant’s sap. An insect can transmit the phytoplasma even after as many as two years of picking it up.