Removing Oleander Bushes – How To Get Rid Of Oleanders 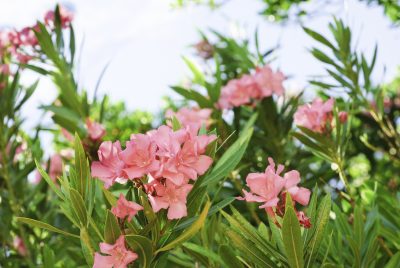 Oleander produces attractive flowers and fuss-free foliage but sometimes it is simply too tenacious and becomes invasive or even poses a danger to your children or pets with its toxic foliage. Removing oleander bushes is easier said than done, however, as they develop a huge root system, numerous vigorous suckers and entrench themselves firmly in their garden home.

Speedy growth and constant grooming are other reasons for getting rid of oleander plants but the chore isn’t for the faint of heart. Read on for some tips on how to get rid of oleanders with success.

While many of us may know oleander as an attractive ornamental bush, there are a few of us that curse the day we started growing the vigorous plants. Oleander can take over an area, and their poisonous nature makes them dangerous with young children and pets around the home environment.

Often, removing oleander bushes is the only safe decision when young people and animals can be potentially affected. However, oleander has the potential to return through left behind roots or suckers. Permanent removal of oleander often requires chemical intervention or professional gardening tools.

Oleander bushes form extensive root systems after they have matured and become established. The oleander root system is tough and can grow amongst rocks and other obstacles, making them perfect foundation plants or specimens along the drive. However, once the root system is entrenched in any underground objects, it may take even more than a crowbar to remove them.

Gardeners have reported using trucks to pull out stubborn stumps and roots, as well as chemical attacks to simply kill roots. Bleach, glyphosate and other herbicides are often cited as useful, but it is important to consider what these substances do to the soil and water table.

Getting rid of the entire oleander root system and any suckers can also be done with brute force and some specialized tools.

How to Get Rid of Oleanders

Getting rid of oleander plants without using chemicals takes dedication and perseverance. You will need to dig around and under the entire bush. Oftentimes, it is easier if you simply cut back all the limbs and stems so you can get a good grip on the stump and root system.

Vigorous roots may be too entrenched to simply dig out, so you should have on hand a pry bar, root saw and an extra set of hands. There are even stories of truck bumpers being pulled off in attempt to remove the stump and roots of an oleander. If you fail to get all the roots, new shoots will occasionally appear, but these are easy to deal with by vigilant cutting. Slow and steady wins the race, and patience will pay off with consistent shoot removal that will eventually sap the strength of the roots.

Suppose you have done the slow, patient removal method and your oleander still sends out shoots that are becoming small trees before you can cut them down. Enter the word frustrated. Frustrated people do interesting things. Some of the ideas bantered about for oleander bush removal include:

Each suggestion is potentially worse than the last, as far as potential side effects go. You can hire a tree removal service to grind the stump, which is costly, but effective and safe. If you wish to use chemicals, get a good stump remover and apply it directly into holes drilled into the stump. Drill 4 holes and apply 4 to 6 ounces (124 to 186 gr.) of the stump remover product. It can take 6 weeks or more for the stump to begin to disintegrate. This method of getting rid of oleander plants is toxic, but when properly applied, it is targeted and should cause no harm to neighboring shrubs and plants.

Note: Any recommendations pertaining to the use of chemicals are for informational purposes only. Specific brand names or commercial products or services do not imply endorsement. Chemical control should only be used as a last resort, as organic approaches are safer and more environmentally friendly