What Is Toyon: Learn About Toyon Plant Care And Information 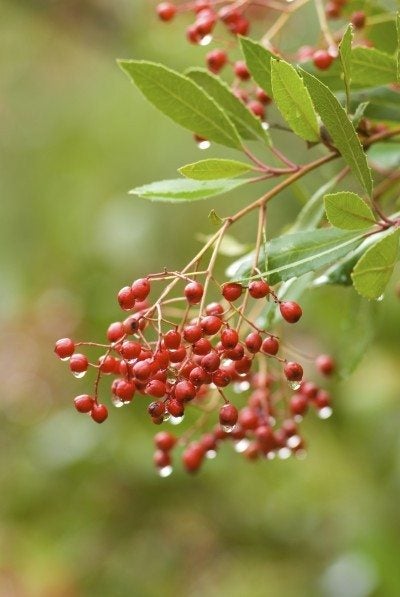 Toyon is a shrub that produces clusters of small white five-petaled flowers that smell like hawthorn. If you read up on toyon facts, you’ll find that butterflies love the summer flowers. The flowers ultimately give way to berries, themselves devoured by a large variety of wild birds, including cedar waxwings, quail, towhees, Western bluebird, robins, and mockingbirds. The berries decorate the shrubs for many weeks until they get ripe enough for the birds to eat.

Toyon is native to much of the state, growing in chaparral, oak woodlands, and evergreen forest communities. It is also Los Angeles’s official native plant – adaptable, easy-to-grow and works well as a specimen shrub, in a privacy hedge or as a container plant. With its deep roots and drought tolerance, toyon is also used for erosion control and slope stabilization.

The common name toyon comes from the Ohlone people who used parts of the shrub medicinally, for food and also for ornaments. Its green leaves are leathery with serrated margins, varying from long to short, and from thin to wide. The tiny flowers look like plum blossoms.

Toyon is hardy, drought tolerant, and versatile, growing in almost any type of soil and exposure. However, toyon grown in shady locations is a little leggy as it stretches toward the nearest sunlight. Plant toyon in full sun if you want a full, compact bush.

Once established, the plant doesn’t need water in summer. Careful where you plant toyon, too, as it grows to about 15 feet (5 m.) high by 15 feet (5 m.) wide, and it can get almost twice that size with age. Don’t worry too much though, since toyon tolerates shaping and pruning.

Even in ideal toyon growing conditions, the shrub grows only moderately fast, but they are almost maintenance free. You won’t need to prune them, feed them or even irrigate them in the summer.

They are deer resistant as well, the very last plant in your garden to get nibbled and only when deer become desperate.