What Are Carobs: Learn About Carob Tree Care And Uses 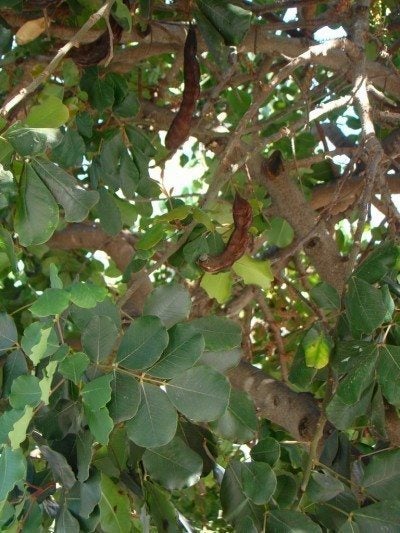 While little known to many people, carob trees (Ceratonia siliqua) have a lot to offer to the home landscape given suitable growing conditions. This age-old tree has an interesting history as well as a number of uses. Keep reading for more carob tree information.

Chocolate, how do I love thee? Let me count the ways… and calories. Made up of about half fat, chocolate addictions (such as mine) beg for a solution. Carob is just that solution. Rich not only in sucrose but also 8% protein, containing vitamins A and B plus several minerals, and about one-third the calories of chocolate without the fat (yep, fat free!), carob makes an ideal substitute for chocolate.

So, what are carobs? Carob growing in the their native habitat can be found in the eastern Mediterranean, probably in the Middle East, where it has been cultivated for over 4,000 years. Carob growing has also been referred to in the Bible and was known to the ancient Greeks as well. In the Bible, the carob tree is also called St. John’s bean or locust bean in reference to the “locusts” eaten by John the Baptist, which were represented by the hanging pods or legumes of the plant.

A member of the Fabaceae or Legume family, carob tree information states that it is an evergreen tree with pinnate leaves of two to six oval pairs that grows to about 50 to 55 feet (15 to 16.5 m.) tall.

Cultivated around the world for its sweet and nutritious fruits, carob seeds were once used to weigh gold, which is where the word ‘carat’ is derived. The Spanish brought carob growing to Mexico and South America, and the British introduced carob trees to South Africa, India and Australia. Introduced into the United States in 1854, carob trees are now a familiar sight throughout California where its warm, drier climate is ideal for carob growing.

Thriving in Mediterranean-like climes, carob grows well anywhere that citrus grows and is grown for its fruit (pod), which is most familiarly known for its use ground into a flour and substituted for cocoa beans. The long, flat brown carob pods (4 to 12 inches (10 to 30.5 cm.)) also contain a polysaccharide gum, which is odorless, tasteless, and colorless, and is used in many products.

Livestock may also be fed carob pods, while people have long used the pod husks for medicinal purposes such as that of a throat balm or chewing lozenge to relieve hoarseness.

How to Grow Carob Trees

Sowing seed directly is probably the most common method for how to grow carob trees. Fresh seeds germinate quickly, while dried seeds need to be scarred and then soaked for a period of time until swollen two to three times in size. Traditionally planted in flats and then transplanted once the seedlings attain a second set of leaves, germination for carob trees is only about 25 percent certain. Carob should be spaced 9 inches (23 cm.) apart in the garden.

For the home gardener, an established 1-gallon (4 L) carob tree start might more prudently be purchased from a nursery. Keep in mind that conditions in your garden must closely mimic those of the Mediterranean, or grow carob in a greenhouse or in a container, which can be moved into a protected area indoors. Carob trees may be grown in USDA zones 9-11.

Be patient as carob trees grow slowly at first but begin to bear in the sixth year of planting and may remain productive for 80 to 100 years.

Carob tree care dictates establishing the carob tree in an area of the landscape in full sun and well-drained soil. While carob can withstand drought and alkalinity, it does not tolerate acidic soil or overly wet conditions. Water the carob infrequently, or not at all, depending on your climate.

Once established, carob trees are strong and resilient and are affected by few diseases or pests, although scale may be an issue. Severe infestation of these immovable armored insects may cause oddly shaped and yellowing leaves, oozing bark, and general stunting of the carob tree. Prune out any areas that are afflicted with scale.

Some other insects, such as predatory lady beetles or parasitic wasps, may afflict the carob as well and can be treated with horticultural oil if absolutely necessary.

Really, the biggest threat to the carob is its dislike for soggy soil and overly wet conditions, which lead to stunted trees and inability to absorb nutrition, causing yellowing and leaf drop. Generally, an established plant will not need to be fertilized, but if these problems are plaguing the tree, a dose of fertilizer may be beneficial and, of course, cut back on irrigation.