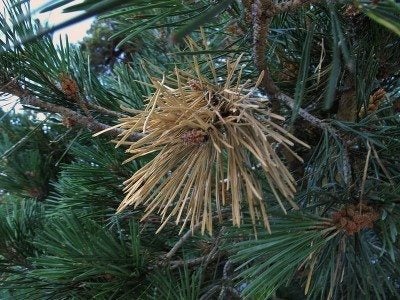 Diplodia tip blight is a disease of pine trees and no species is immune, although some are more susceptible than others. Australian pine, black pine, Mugo pine, Scotts pine, and red pine are the worst afflicted species. The disease can reappear year after year and over time cause death to even large pine varieties. Sphaeropsis sapina causes tip blight of pine but it was once known as Diplodia pinea.

Pine tip blight is a fungus that frequently attacks trees that are planted outside their natural range. The disease travels by spores, which require water as an activating substance.

Tip blight of pine overwinters on needles, cankers, and two-year-old cones, which is the reason older trees are more frequently infected. Tip blight fungus can become active in a wide range of temperatures and will begin producing spores within a year of infection.

Tree nurseries are not often affected by the fungus due to the youth of the trees but older stands in forested areas can become decimated by sphaeropsis sapina blight.

The current year’s growth is the frequent target of the tip blight fungus. The tender, young needles will turn yellow and then brown before they have even emerged. The needles then curl and eventually die. A magnifying glass would reveal the presence of small, black, fruiting bodies at the base of the needles.

In severe infections, the tree can become girdled by cankers, preventing water and nutrient uptake. The fungus will cause death without pine tip blight control. There are many other tree problems that will mimic the symptoms of pine tip blight.

Insect injury, winter drying, moth damage, and some other needle diseases look similar. Cankers are an excellent clue that the damage is due to tip blight fungus.

Good hygiene is an easy way to minimize and prevent the disease. The tip blight fungus overwinters in debris, which means the removal of dropped needles and leaves will limit the tree’s exposure. Any infected plant material needs to be removed so the spores cannot jump to previously healthy tissue.

When pruning out infected wood, make certain you sanitize the pruners between cuts to prevent further spread.

Fungicides have offered some control. The first application must be before bud break with at least two more applications in ten-day intervals for effective pine tip blight control.

Trees that have been well cared for and have no other stresses are less likely to acquire the fungus. Pine trees in the landscape need to receive supplemental watering in drought periods.