What Is Ball Moss: Tips For Getting Rid Of Ball Moss 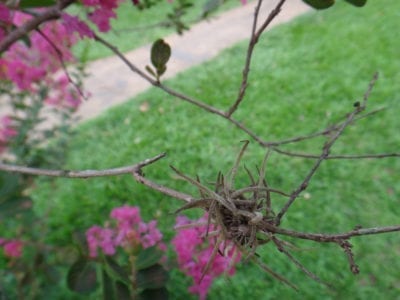 If you have a tree that is covered in Spanish moss or ball moss, you might be wondering if it can kill your tree. Not a bad question, but to answer it, you first need to know what ball moss is before determining whether ball moss is bad or not.

What is Ball Moss?

Ball moss is gray-green and commonly found on tree branches and telephone wires. It grows in small clumps about 6-10 inches (15-25.5 cm.) across. The tiny seeds are blown on the wind until they land on a tree branch or other suitable area. They stick to the area and develop pseudo-roots that attach to the bark of the tree.

Ball moss is often mistaken for Spanish moss. While it is not Spanish moss, both are epiphytes. Epiphytes are plants that attach themselves to trees, power lines, fences, and other structures with pseudo-roots. Unlike other plants, epiphytes do not absorb water and minerals but rather have the ability to uptake nitrogen in the air and convert it into a form that the plant can use nutritionally.

Epiphytes are true plants that bear flowers and seeds and are members of the Bromeliad family along with not only Spanish moss but pineapple as well.

Since the moss is not taking anything from the tree, it is not a parasite. Ball moss may, indeed, be found on less than healthy trees more often than not, but that is simply because a sick tree may have less dense foliage, and the less foliage, the more obvious ball moss will become. So really, it is just a matter of convenience that ball moss favors growth on sick trees.

The trees aren’t sick because of the ball moss. In fact, when ball moss dies, it drops to the ground and decomposes, actually providing fertilizer for plants surrounding the tree. While ball moss isn’t bad for the tree, it can look unsightly. Getting rid of ball moss is no walk in the park though. Read on to learn about ball moss control.

Getting Rid of Ball Moss

Since we ascertained that ball moss isn’t a parasite and isn’t causing the tree to be sick in any way, there usually isn’t a reason to get rid of ball moss. That said, if the tree is heavily covered and it’s bothering you, ball moss control may be for you.

Ball moss control can be established using three methods: picking, pruning, or spraying. Sometimes, a combination of these methods is the best way to control ball moss.

Remember that often it will take a combination of the three methods to remove the ball moss in its entirety.