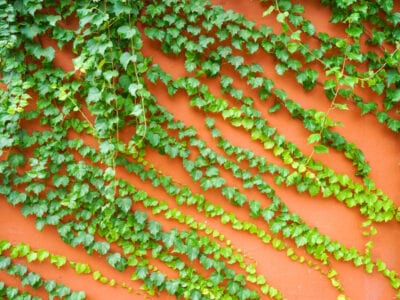 Boston ivy is a vine that is especially popular in dense, urban areas where a plant has nowhere to go but up. This ivy’s beautiful, deeply lobed leaves are glossy on both sides and coarsely toothed around the edges. They look stunning against stone walls as the vine rapidly climbs them.

Boston ivy attaches itself to the steep walls it climbs by means of tiny rootlets. They emerge from the vine stem and latch onto whatever support is nearest. Left to its own devices, Boston ivy can climb up to 60 feet (18.5 m.). It spreads out in either direction as well until the stems are trimmed back or broken.

So does Boston ivy lose its leaves in autumn? It does. When you see the leaves on your vine turning a brilliant shade of scarlet, you know that soon you’ll see leaves falling from Boston ivy. The leaves change color as the weather cools down at summer’s end.

Once the leaves fall, you can see the tiny, round berries on the vine. The flowers appear in June, whitish-green and inconspicuous. The berries, however, are blue-black and beloved by songbirds and small mammals. They are toxic to humans.

Other Causes of Leaves Falling from Boston Ivy

Leaves falling from Boston ivy in autumn usually do not indicate a problem with the plant. But Boston ivy leaf drop can signal problems, especially if it happens before other deciduous plants are dropping leaves.

If you see your Boston ivy losing leaves in spring or summer, look closely at the foliage for clues. If the leaves yellow before they drop, suspect a scale infestation. These insects look like small bumps along the vine stems. You can scrape them off with your fingernail. For large infections, spray the ivy with a mixture of one tablespoon (15 mL.) of alcohol and a pint (473 mL.) of insecticidal soap.

If your Boston ivy lost its leaves after becoming covered with a white powdery substance, it might be due to a powdery mildew infection. This fungus occurs on ivy during hot dry weather or very humid weather. Spray your vine with wet sulfur two times, a week apart.

Printer Friendly Version
Read more about Boston Ivy
<Previous
Did you find this helpful? Share it with your friends!
FacebookTweetPinEmail
Related Articles
Newest Articles
You might also like…
Additional Help & Information