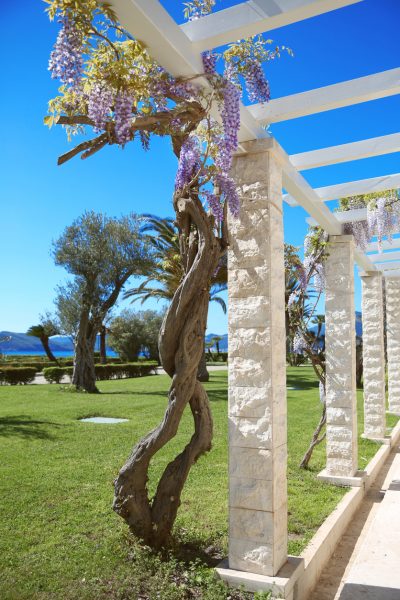 How Big Do Wisteria Roots Grow?

When you consider how tall wisteria vines can grow, it just makes sense that the wisteria root system is strong and aggressive. For example, Chinese wisteria can shoot up to 60 feet (18 m.) with stems up to 15 feet (5 m.) in diameter. Both Chinese wisteria and Japanese wisteria are the two most popular types of garden wisteria in the U.S., and both grow and spread aggressively.

The wisteria native to the United States is Wisteria frutescens. It grows to 30 feet (9 m.) tall, and the roots are a bit less aggressive than the imports. As a woody plant, however, it still has powerful roots that you don’t want close to your sewer pipes.

Experts recommend that if you locate a wisteria near a structure or walkway, you should insert a corrugated panel some 6 feet (2 m.) long and several feet (1 m.) wide beside the plant to divert the roots.

You may be thrilled at how fast your new wisteria grows, throwing up a vigorous vine and developing a powerful wisteria root system. However, if one day you decide to remove the vine, you will be less thrilled.

Wisteria root removal can be a big headache. You can perform this manually, mechanically, or with chemicals. However, you will probably have to invest quite a lot of time before you are certain the wisteria root system is completely eliminated.