Castor Oil For Garden Use: Tips On Treating Pests With Castor Oil 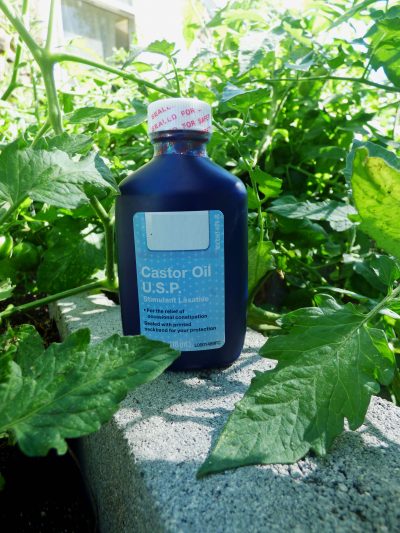 Trying to be a good steward to the earth means minimizing your impact on the natural order of life. We do this in many ways, from driving a low-emission car to choosing local foods at our supermarket. Another way to limit our negative influence on the earth is by gardening smart: use safe, non-toxic herbicides, sustainable gardening practices, and natural pesticides. Using castor oil in the garden can be part of good garden management without the potential side effects that commercial formulas may cause. Read on to learn more.

What is Castor Oil?

For many of us older gardeners, castor oil represents a childhood trial. Once upon a time, mothers gave their children castor oil to regulate digestive health. It was once thought to be good for the digestive system and spoonfuls of the foul stuff were force-fed into unwilling children’s mouths. This foul-tasting practice has gone out of fashion in favor of other better-tasting and more convenient over-the-counter remedies, but that doesn’t mean we need to retire the oil. There are many beneficial uses for castor oil, such as using the oil as a pesticide.

Castor oil for garden use may repel voles, moles, and possibly other digging and tunneling animals, such as armadillos. Treating pests with castor oil is a natural, non-toxic way to repel these unwanted digging animals in your garden without hurting them or causing poisonous chemicals to build up in the garden and groundwater. Additionally, using castor oil as pest control is non-toxic and safe around children and pets.

So where does castor oil come from? The castor bean plant, which is occasionally grown in gardens as an ornamental – BUT its beans are toxic and shouldn’t be grown where pets or small children are found. The oil itself, however, is safe and readily available through most retailers.

Castor Oil for Garden Use

Wild animals can pose a problem in the home garden. Mole hills pop up overnight, skunks dig up prized plants in search of grubs, and squirrels unearth your bulbs and render them useless for the bloom season. One way to minimize the damage that naturally occurs when animals forage is to use castor oil as pest control.

It may sound silly but this out-of-fashion medicinal is a common part of natural commercial pesticides. How does castor oil repel animal pests? It seems the bitter taste and the unpleasant smell are the keys. Just as children had to hold their noses to take the stuff back in the day, so too, our animal friends are sickened by the ripe odor and bitter taste.

Using Castor Oil in the Garden as a Pesticide

Castor oil won’t kill animal pests, but it will repel them. To harness the effect, you need to apply castor oil directly to the soil. The formula will work for a week or so even in the rainy season. Weekly applications are the most effective at controlling animal damage in the garden.

Use a hose-end attachment and spray a mixture of 2 parts castor oil and 1 part dish soap. Mix the two items until they are foamy. This is the concentrated solution and needs to be used at a rate of 2 tablespoons (29.5 mL.) per gallon (4 L.) of water. Apply evenly to the affected areas.

Treating pests with castor oil weekly will see fewer mole hills and dug-up garden beds without any danger to your pets and children or the environment.