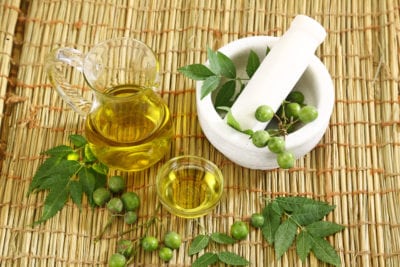 Are Azadirachtin and Neem Oil the Same?

Neem oil and azadirachtin aren’t the same, but the two are closely related. Both come from the neem tree, native to India but now grown in warm climates around the world. Both substances are effective for repelling and killing insect pests and also interfere with feeding, mating, and egg laying.

Both are safe for humans, wildlife, and the environment when used properly. Bees and other pollinators are also unharmed. However, neem oil and azadirachtin insecticide may be slightly to moderately harmful to fish and aquatic mammals.

Neem oil is a mixture of several components, many of which have insecticidal qualities. Azadirachtin, a substance extracted from neem seeds, is the primary insecticidal compound found in neem oil.

Azadirachtin has proven to be effective against at least 200 insect species, including common pests such as:

Some growers prefer to alternate azadirachtin with other pesticides because doing so decreases the risk that pests will become resistant to frequently used chemical pesticides. Azadirachtin is available in sprays, cakes, water-soluble powder, and as a soil drench.

When azadirachtin is extracted from neem oil, the substance left over is known as clarified hydrophobic extract of neem oil, commonly known simply as neem oil or neem oil extract.