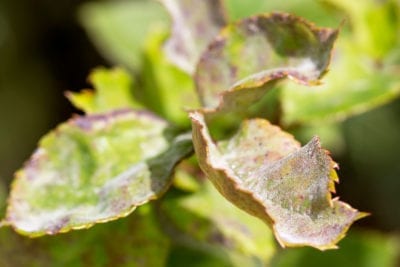 Powdery mildew in the greenhouse is one of the most frequent diseases to afflict the grower. While it does not usually kill a plant, it reduces the visual appeal, thus the ability to make a profit. To commercial growers it is invaluable to learn how to prevent powdery mildew.

Powdery mildew affects many of the commonly cultivated ornamentals grown in greenhouses. It is a fungal disease that may be caused by different fungi such as Golovinomyces, Leveillula, Microsphaera, and Spaerotheca.

Whichever fungi is the causal agent, the results are the same: a downy white growth on the plant’s surface which is actually a multitude of conidia (spores) that are easily spread from plant to plant.

In the greenhouse, powdery mildew can infect even when the relative humidity is low but becomes severe when relative humidity is high, over 95%, especially at night. It does not require moisture on the foliage and is most prolific when temps are 70 to 85 degrees F. (21-29 C.) with relatively low light levels. The close proximity of plants in a greenhouse can allow the disease to spread unchecked.

How to Prevent Powdery Mildew

Clean the greenhouse between crops, making sure to remove all weeds that act as hosts. If possible, select resistant cultivars. Utilize preventive applications of biological fungicides, if necessary, as part of a rotation with chemical fungicides.

Powdery mildew is notorious for its ability to develop resistance to fungicides. Therefore, different fungicides should be utilized and applied prior to the appearance of the disease.

Powdery mildew only afflicts the upper layer of cells so chemical controls are unnecessary when the disease is at its peak. Spray as soon as the disease is detected and rotate amongst the fungicide choice to discourage resistance.

For particularly susceptible crops, spray fungicides prior to any symptoms and apply systemic fungicides proven to be effective against the disease every two to three weeks according to the manufacturer’s instructions.

Printer Friendly Version
Read more about Greenhouses
<PreviousNext>
Did you find this helpful? Share it with your friends!
FacebookTweetPinEmail
Related Articles
Newest Articles
You might also like…
Additional Help & Information