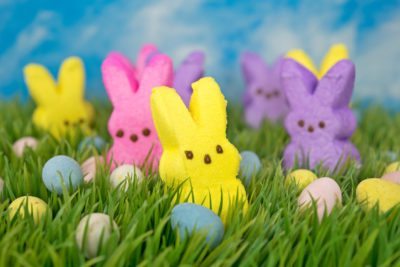 Easter has arrived and with it means the return of those pesky marshmallow peeps. While peeps in the garden may not pose a problem for some people, many of us simply don’t appreciate it when the gooey, creeping menaces take over our beautiful Easter grass and garden areas. Read on to find out how to get rid of peeps before they become difficult.

Yes, they may be cute and fluffy, but these sugar coated chick- and bunny-shaped marshmallows can quickly flock the lawn and garden in no time. The good news is that marshmallow peeps are easy to manage if you know what attracts them and catch the little critters early.

There are different types of peeps but most fall into one of two categories: chicks or bunnies. So how do you tell which one you have lurking in the landscape? Here’s a quick trick to telling them apart – look closely at their shape! In addition to their appearance, both may be found in a number of colors, most commonly yellow and pink, although pastel shades of blue and purple are also popular around Easter time.

Another way to recognize peeps in the garden is by paying attention to what’s growing around them. For example, chick varieties can be found chirping alongside common plants such as hens and chicks, eggplant, or even chickweed. It’s easy to spot those well-hidden rabbit peeps amongst bunny tail grass, carrots, rabbit’s foot fern, and bunny ears. Peeps marshmallow bunnies also have an affinity for chocolate.

A small patch of peeps may seem harmless enough, even kind of cute, but did you know that in just a year, these peeps marshmallow bunnies and chicks can produce enough babies to circle the earth two times over! Now that’s a lot of peeps.

Depending on the type of peeps in the garden, control options may vary. For instance, peep chicks don’t pose as much a threat as their rabbit counterparts. In fact, like most chickens, these peeps may appear to be eating your precious Easter grass or other garden plants but, in fact, they’re busy foraging for worms and grubs, causing little damage to healthy, full grown vegetation.

Simply removing plants they’re attracted to and fencing off the area will help keep the chicks at bay. Collecting these peeps by hand and placing them in a basket is another way to safely remove them from the garden and makes relocation much easier. Just be sure to wear gloves when handling these sticky marshmallow chicks.

Those fluffy, little bunnies, on the other hand, are a different matter altogether. They spread quickly and dramatically, and also feed on many beloved garden plants, including young fruit trees. The best method of control for these marshmallow peeps is removal of favorite plants, especially chocolate flowers, chocolate mint, and chocolate vines. Replacing these with rabbit resistant plants will help but isn’t fool proof.

In severe cases, flame weeding may be necessary. Although a little messy, the pests will melt away. If you’re not into anything this drastic, then trapping and relocation is possible. While not as easy as chick peeps, marshmallow bunnies may be difficult garden pests to deal with, but once you learn how to manage them responsibly, you can once again enjoy your Easter holiday without the fear of these fluffy critters taking over the landscape.

Printer Friendly Version
Read more about Special Articles
<PreviousNext>
Did you find this helpful? Share it with your friends!
FacebookTweetPinEmail
Related Articles
Newest Articles
You might also like…
Additional Help & Information